※ explorer 11, Microsoft 엣지 44 이상의 버전에서 이용 가능합니다.
인쇄하기 스크랩 RSS
폰트축소 폰트확대
Actor Yoo A-in has played a variety of roles, particularly of characters in their youths from different walks of life starting with the sweet high schooler in KBS TV series "Sharp" to the lost teenager in film "Boys of Tomorrow" to the lonely warrior in KBS' "Mighty Chil-woo" to the energetic patissier aspirant in film "Antique" and the 'guy these days' in KBS' "He Who Can't Marry."

Then most recently, he was Moon Jae-shin in KBS drama "SungKyunKwan Scandal" who was the outsider of royal academy SungKyunKwan, a fighter who resists corrupt society, and a romantist who watched the woman he loves from afar -- the very symbol of youths experiencing growing pains. Yoo is 24 now and has grown a beard on his tanned face but whenever he smiles, he goes back to being the fair-complexioned boy whom viewers first saw on screen seven years ago. 10Asia met with the actor who came up with his own stage name A-in, meaning 'ein' in German, to constantly remind himself that he is a unique being in this world. It was not easy keeping up with the numerous ideas existing within the young man but it was definitely worth hearing.

썝蹂몃낫湲 븘씠肄
10: You wrapped up filming of "SungKyunKwan Scandal" on the day it ended its run. How have you spent the past few days? I think you must've been busy doing everything you hadn't been able to recently.
Yoo A-in: I've been drinking the whole time since I don't have to work at night. (laugh) But no matter till how late I drink, I've been waking up early because it's become a habit from filming "SungKyunKwan Scandal." It makes me angry. (laugh) I actually get drunk pretty easily, maybe off half a bottle of soju [Korean vodka]? And I stay that way until I pass out. But I can't pull all-nighters anymore. I go home at around two or three in the morning. Why am I talking about drinking?

10: Let's talk about your drama. (laugh) You mentioned before that you took on "SungKyunKwan Scandal" with the determination that you would play the role of Moon Jae-shin. What was it about that character that was so appealing to you?
Yoo: I think I was drawn to who he is within the drama. He would be away from the other students at the royal academy of SungKyunKwan, climb a gingko tree and sit there alone, as well as wear his clothes and hair differently but it's not because he wanted to stand out. At the same time, it was refreshing that he was only an outsider at SungKyunKwan, not from the entire world. I become curious about why he lived in that space like that when he had taken an exam to enter it and I felt he was similar to me. 10: SungKyunKwan is sort of a space you could call a school.
Yoo: But it wasn't a school that the entire population went to or similar to the schools we went to. It was where people took extremely elite courses during the Joseon Dynasty. From what I know, there were less than 500 students at the academy and you got into politics as soon as you graduate from there so it was probably like law school. Being an outsider there is different from the kid who stares out the window at an ordinary school since it's usually not easy for kids taking such elite courses to act like that. (laugh) They're too smart and want to become mainstream, as well as being sly enough to know how to act in the right way at the right time. So I was very curious of what Jae-shin was thinking, how he could be so different alone. 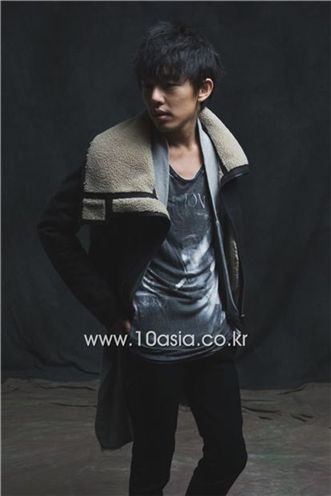 썝蹂몃낫湲 븘씠肄
10: Then what did you feel or discover while acting his role?
Yoo: Towards the end I came to feel that he's a very tender-hearted person, that he's a real kid. (laugh) That's why it was difficult to control my acting in showing how he has trouble expressing his emotions versus him also being straightforward and blunt. I also think I may have gone too deep in terms of emotional expression when portraying how he feels towards Yoon-hee (Park Min-young). In dramas, female characters are usually slow when it comes to love but I too had played so little roles in which my character loves someone. (laugh) I thought a lot about how to shoot the scene where in the 19th episode, I drop off Yoon-hee in front of the prison Seon-joon (Park Yu-chun) is at and tell her to go see him by herself. I talked to the director a lot about this, on whether it's something that Jae-shin would actually do or if it just couldn't be helped because according to the plot of the story, he has to pull back.

10: I actually was curious on what it was that Jae-shin felt for Yoon-hee.
Yoo: Yoon-hee was a character Jae-shin had been interested in from the first moment they met, even before he developed romantic feelings for her. He used to be a guy who has his back turned against the world, regards all students at SungKyunKwan in the same way, and is prejudiced about them just like they are about him. But I think he changes after meeting Yoon-hee who has a lot of spunk, is funny and interesting. And in that process, he develops feelings for her, then finds out she's actually a girl, so I think he came to want to protect and care for the lovely eyes and heart she has. And in both the drama and original comic, Yoon-hee is meant to end up with Seon-joon so according to that outcome, I tried to show that he also wants to protect her in a brotherly way.

10: It wasn't only the romance but also the process of how the characters grow that served as the framework to "SungKyunKwan Scandal." The moment that left a strong impression about Jae-shin in particular was when in tears, he says to his dad, whom he resented since the death of his older brother, "I acted up that I was hurting more than you. I was wrong. And I was sure that I loved brother more than you did. I was wrong about that as well."
Yoo: What I felt was so child-like about Jae-shin was how poor he was at expressing himself and how he didn't know what to do about how he felt. He was so much of an idealist that he was trapped inside his own thoughts and felt, 'Nobody hurts more than I do. Nobody is having a tougher time than I am. My pain is the worst.' Because surprisingly, people with such pain or sadness feel that they're more superior. There was a time that I felt like that as well. Of course, I don't think Jae-shin has matured that much. But he's someone who has a hard time taking even a single step forward while others are taking ten, so even that single step is extremely significant. I think it's significant in that he tore down the walls around him, came to realize that his pain wasn't all that existed in this world, that he was able to talk about it in tears, and smile afterwards.

10: Was there an emotion there that was difficult to show?
Yoo: It was extremely difficult having to laugh at the end of the seventh episode when the king visits SungKyunKwan to give a religious service and shoots an arrow. For every role I've played so far, even when my character is someone who is extremely sad or in pain, I tended to smile a lot and show my emotions the way they are but I just couldn't figure out how to smile as Jae-shin. I got the script about a week or two before shooting the scene and standing in front of the mirror, I tried smiling this way and that but I just couldn't figure it out. Of course I can smile in a way that'll make me look pretty. (laugh) But I wanted to find an emotional link that could lead to laughter. I had the scene re-shot as well but I still don't think I pulled it off 100 percent.

썝蹂몃낫湲 븘씠肄
10: I think you're the type that can't bear not immersing yourself in every scene.
Yoo: It's because there's a reason I say my lines and put on expressions but I would sometimes end up doing them for no reason. I would say a line, laugh, or give a look without thinking about it. (laugh) Oh, and that's not automatic, I very much so do it on purpose. It's also a technical aspect. Of course, there are also people who want to see such things and it makes my job easier too. When I was tired, there were moments I thought, 'What's the need for a reason, I'll get an okay sign for it." In that sense, there are things I'm both happy and sorry that "SungKyunKwan" ended. Jae-shin wasn't a character I pulled off perfectly so maybe I could have done better.

10: What did you feel while shooting "SungKyunKwan Scandal" based on your past learning or experience?
Yoo: The aspect that I felt I lacked the most in creating Jae-shin was vocalization. Set aside the experience I have in showing my emotion through my acting, having good vocalization is a basic quality required of all actors but no matter how much I wanted to produce other sounds, my throat and breath would reach a limit so I could only produce certain sounds within that. And it's not just about the sound. It's something which could expand my character's range so I'm disappointed I wasn't able to do that to its fullest.

10: I heard that you worked hard to correct your pronunciation and vocalization from a long time ago and you've improved a lot now.
Yoo: I heard from a lot of people that I have a lisp. (laugh) And it's not that it's gotten much better now -- I just think people notice it less after I started to say my lines more naturally. My pronunciation isn't that good either. I mumble. But technically, I'll lump my words together rather than define each word so I think that helps my lines look more natural. (laugh)