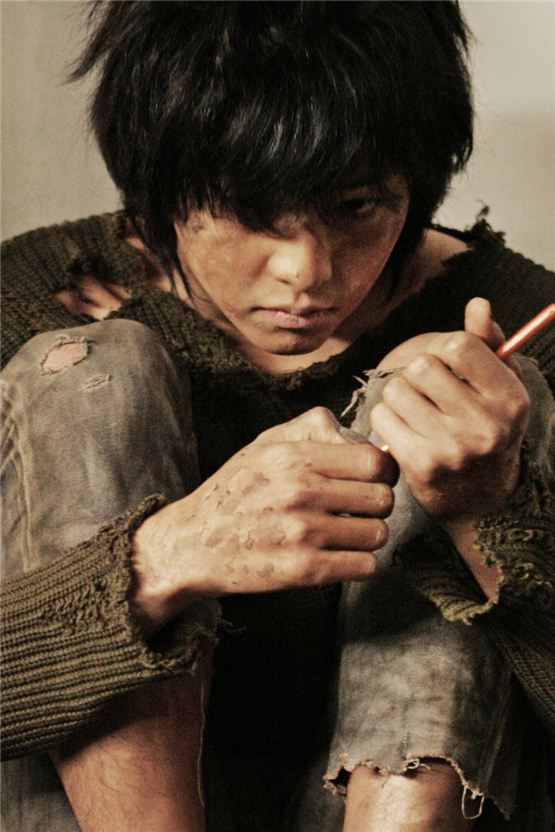 썝蹂몃낫湲 븘씠肄
Korean actor Song Joong-ki has confessed about temporarily getting confused when depicting a teenage boy who is a half wolf and a half human in his upcoming melodrama pic.

At the press conference of “Werewolf Boy” opened at the CGV movie theater in Seoul, Korea on September 26, the actor revealed his effort to describe his character by learning animals' behavior. “What helped me most to describe my character were watching stray dogs and documentaries about animals. (laugh) Seriously, I even carefully examined dogs wandering around the set because I was very nervous before start filming the scenes,” Song said with a smile.

“I spent weeks agonizing how to describe my never-seen-before character. But when I hit the set and started acting, I could feel that I was getting closer to being the werewolf boy. Bo-young helped me a lot to understand the boy,” the actor expressed appreciation for his opposite actress Park Bo-young.

“Werewolf Boy” tells the touching love story between a young werewolf boy [played by Song], who has been abandoned by the world, and a beautiful teenage girl [played by Park] who used to isolate herself but opens up her mind with the werewolf boy's help. Helmed by director Jo Sung-hee of critically acclaimed pic “End of Animal” (2010), supporting actors Jang Young-nam, Yoo Yeon-seok and Kim Hyang-gi also star in the pure love story.

The wistful fantasy film will be introduced at the 17th Busan International Film Festival [BIFF] on October 12 and hit local theaters on October 31.