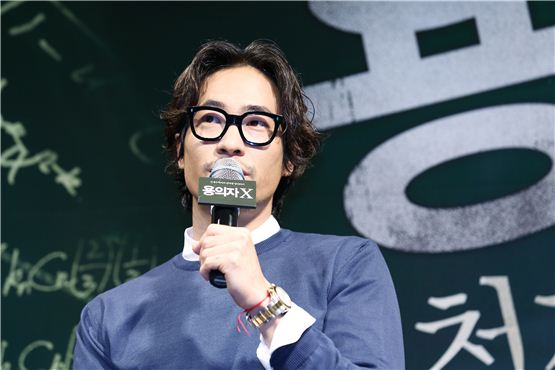 썝蹂몃낫湲 븘씠肄
Korean actor Ryu Seung-bum has confessed the difficulties he had to describe a mathematician in the upcoming pic “Perfect Number.”

The talented actor said he had troubles depicting the genius mathematician and playing in deep melodrama scenes for the first time, at a press conference for "Perfect Number" at the CGV movie theater in Seoul on September 19. “I've even asked the staffs whether those complicated mathematical calculations actually do exist, or the staffs made them up for filming. I could only understand Arabic numbers and other symbols were impossible for me to understand,” Ryu said with a mischievous look on his face.

“Acting in a melodrama used to be a kind of an assignment for me. And it was my first time to portray self-scrificing love. So I talked about my worries with Cho Jin-woong for hours with a few drinks,” the comedy actor said.

Ryu then added, “I still have a question whether this kind of unique love is even possible in the real world. But at least I was able to describe and experience it in the movie thanks to the crews' help.” “Perfect Number,” the film adaption of famous Japanese comic “Suspect X,” centers around a genius mathematics professor named Suk-go [played by Ryu] who plans a perfect alibi to cover up the accidental murder of his secret lover Hwa-sun’s [played by Lee].

Helmed by actress-turned-director Bang Eun-jin of “Princess Aurora” (2005), veteran actor Cho Jin-woong will co-star as Min-bum, the detective in charge of the murder case.

The mystery feature will first be introduced at the 17th Busan International Film Festival [BIFF] on October 7 and hit local theaters on October 18.