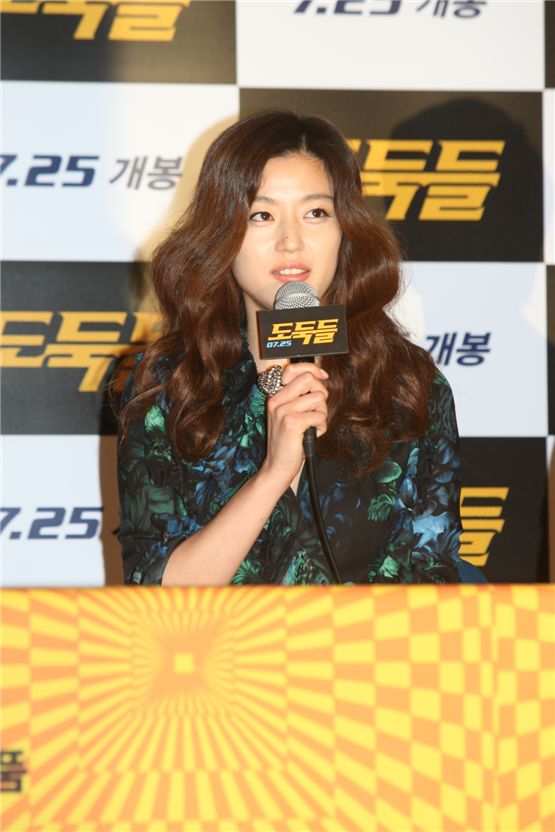 썝蹂몃낫湲 븘씠肄
Korean actress Jun Ji-hyun is seeking to achieve another big leap in her acting career with her next film, “The Thieves,” which she expects is to be the next successful pic after "My Sassy Girl" released 11 years ago.

With relaxed manner but determined attitude, Jun confessed about the outcome of one of the highest grossing Korean comedies of all time at the “The Thieves” press conference in Seoul on July 10. "The international fame of 'My Sassy Girl' gave me lots of opportunity to work actively abroad. All those experiences have brought me to meet 'The Thieves,' the great director and marvelous actors,” Jun said with confidence.

“The huge success of 'My Sassy Girl' made every one of my following works look like cut-and-past jobs of the breakthrough film. It’s true that those projects weren't commercially popular but I have no regrets about it because I've always chosen what I like to do when it comes to work."

In “The Thieves,” Jun played a character named Yenicall, a lively character with cool attitude to hide secret attachment to others, just like her character in “My Sassy Girl," even though the actress denied that they are similar. The action drama pic tells the story about a group of ten multinational thieves who have teamed up to steal a diamond hidden inside a casino located in Macao.

However, with all ten thieves having different goals in mind, they secretly set their own plans while pretending to be working as a team.

Scheduled to open in local theaters on July 25, the movie has been creating a buzz with an impressive ensemble cast of top movie stars from Korea and Hong Kong.

Jun made her international debut in 2009 and most recently appeared in film "Snow Flower and the Secret Fan"-- a film adaptation of the novel written by Chinese-American writer Lisa See.

Since April, she has been filming the Korean thriller “Berlin (tentative title)" with actors Ha Jung-woo and Ryu Seung-bum.