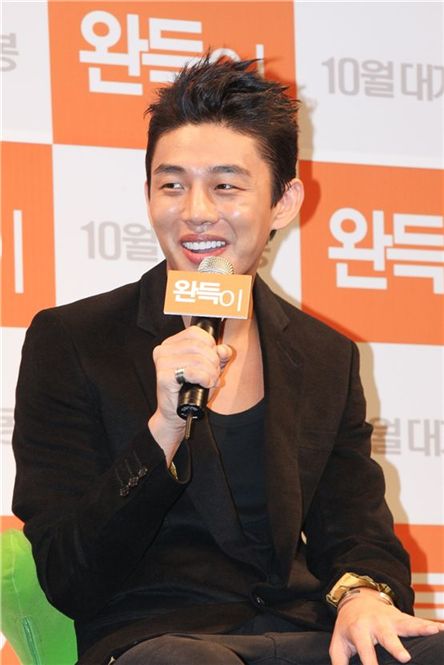 썝蹂몃낫湲 븘씠肄
Korean actor Yoo A-in has gotten a chance to relive his high school days, a time which he has a lingering desire for.

Yoo made the remark during a press conference held in Seoul on Tuesday for his new movie "Punch" where he told local reporters that he was relieved to play Doo Wan-duk, an 18-year-old high school student. "I dropped out of school at an early age and I have regretted it since," Yoo started by confessing.

"It’s more of a feeling of sadness that I have in not having finished school but I feel fortunate enough to be given this chance to turn things around after becoming an actor."

Yoo, 24, dropped out of high school during his freshmen year and made his debut as an actor in 2003 as a student through KBS' teenage TV series "Sharp." With a laugh he added, "I started my career as a high school student and I am thankful that I can still play one seven years later.”

"Punch," based on the award-winning, best-selling novel of the same name by Kim Ryeo-reyong, tells the story of Wan-duk (Yoo) a troubled high school student from a poor household that always gets into fights and in trouble from his homeroom teacher named Lee Dong-joo, played by actor Kim Yun-seok.

Dong-joo, who is also his neighbor, begins to learn more about Wan-duk's past and helps him to grow both at school and in life. The film is slated to open in theaters on October 13.