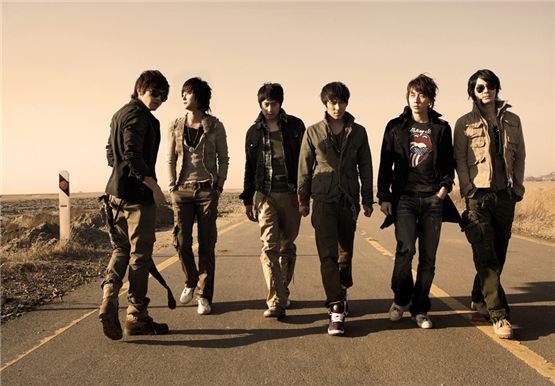 A press release by leader Eric's agency Top Class Entertainment said Monday that as of July 1, the six-man band became the actual representatives and shareholders of Shinhwa Company, making them the first K-pop group to own an entertainment firm. Eric is currently the CEO of the company but member Lee Min-woo will join him after he is discharged from the military next February.

The statement then added that the establishment of Shinhwa Company became possible due to Open World Entertainment, holder of the trademark rights to Shinhwa's name, granting the group permission to use the name as long as they maintain their entity.

Accordingly, Open World, also representing member Jun Jin, will own the rights to Shinhwa's overseas concerts and with Shinhwa Company, will carry out the overseas licensing tasks of the group's full-length albums. Also, the heads of Top Class Entertainment and Liveworks Company, the latter managing the careers of members Shin Hye-sung and Kim Dong-wan, have been appointed directors to Shinhwa Company, Top Class Entertainment will be in charge of promoting Shinhwa and managing the group in general, and Liveworks will support the group's activities regarding albums, concerts and promotions.

However, Shinhwa's members will continue their individual activities under their current agencies including Lee Min-woo who is with M Rising Entertainment and Andy with TOP Media.

The statement ended by providing more detail regarding the group's comeback set for around March of next year, saying that Shinhwa will release their tenth studio release around March 24 and tour about six countries in Asia afterwards.

Shinhwa, one of Korea's most popular boy bands since their debut in 1998 which also gained recognition overseas a few years later, had put a halt to their singing career as a six-man band in March 2008 to pursue individual activities and join the military to complete the two-year duty required of all Korean men.

While Eric and Kim Dong-wan have fulfilled their military duties and Shin Hye-sung is exempt from serving his duties for medical reasons, Jun Jin and Andy will be discharged from their posts this October and Lee Min-woo in February of next year.

Since then, Eric has been working on a mini-album while currently starring in KBS TV series "Spy Myung-Wol," Kim stars in musical "Hedwig and the Angry Inch" and Shin has released an album in Korea with another set to be released in Japan in October.