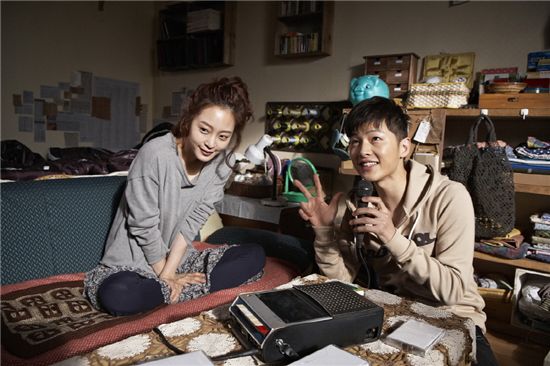 According to a press release by SKY, Song and Han starrer “Saving up for Romance” (translated title), about the money-building adventure of two young people trying to make 200 million won, completed its three month-long shoot on May 16. In “Saving up for Romance,” Song will play the pathetic college graduate Ji-woong who is always depending on his mom for extra cash while hardly earning a thing for himself while Han's chracter Hong-shil is the complete opposite of him, a ruthless penny pincher who denounces all activities that involve wasting money such as dating, going to the church or even a hospital. In the movie, she teaches the art of such penny-pinching.

“It was such fun to shoot the film. Han and I were able to click well with each other and I’m very happy that we completed our project without any accidents,” Song was quoted as saying by the statement.

“This is the film that can show you just how bad the image of a guy as cute as Song Joong-ki could become and what a colorful actor he is!” Han said, also expressing her satisfaction for the project. The film, both helmed and written by director Kim Jung-hwan, is set to premiere in latter half of this year.

He shot to stardom last year after starring in fusion history drama “SungKyunKwan Scandal” which went on air from late August to early November, where he appeared as a rich noble in 18th century Joseon (1392-1910) who always flirts with women.