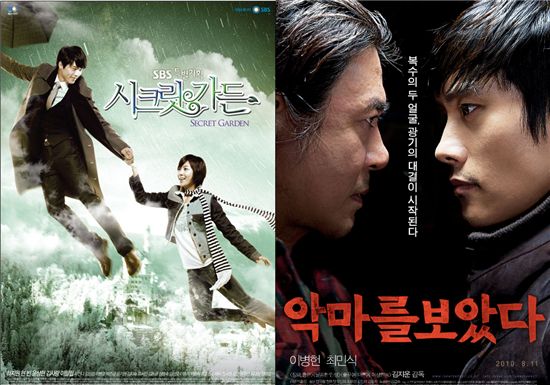 Hyun Bin was crowned the top winner in the TV category for his portrayal of Kim Ju-won in SBS' popular drama "Secret Garden," while Lee was awarded the same honor in the film category for his role in action pic "I Saw the Devil." "Secret Garden," which also starred actress Ha Ji-won, was named the best drama at the event, while actress Yoo In-na and scenarist Kim Eun-sook took home the prize for best new actress and best scenario, respectively.

In the film category, "The Man From Nowhere" was named best picture, critically acclaimed director Lee Chang-dong was awarded the title of best director for his feature "Poetry" and actor Ha Jung-woo and Chinese actress Tang Wei were given crowned best actor and actress, respectively. Big Bang member T.O.P, whose real name is Choi Seung-hyun, collected the prizes for best new actor and the popularity award for his role in his big screen debut war flick "71 Into The Fire."

▲ Best Picture : "The Man from Nowhere"