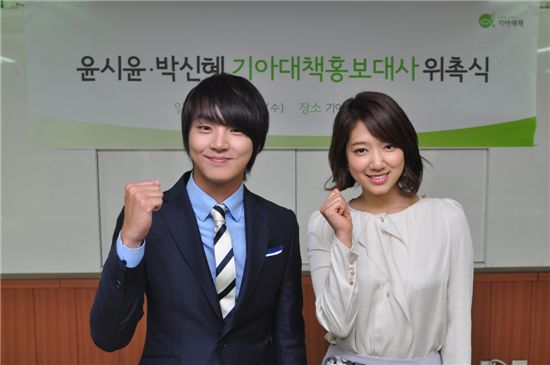 썝蹂몃낫湲 븘씠肄
Actor Yoon Si-yoon and actress Park Shin-hye have been tapped promotional ambassadors to an international relief agency based in Korea.

A press release by Korea Food for the Hungry International (KFHI) said that Yoon and Park were named PR ambassadors the agency yesterday. With the latest appointment, Yoon will take lead in promoting and encouraging donations for “Saengmyung-Jigi” (literally translated as “Life Keeper”), one of the agency’s medical assistant projects for patients facing financial difficulties at home and abroad while Park will do the same for “Happy Home School,” a project dedicated to helping children living in poor environments.

Yoon said through the statement that he was happy to assume the role and promised to be more serious in launching campaigns in order to help suffering children.

Park, too, gave her word to work harder for KFHI’s "Happy Home School" project to help encourage children to keep their hopes high despite being in tough situations. KFHI, the Korean branch of Food for the Hungry International (FHI) established in 1989 is the country’s first NGO dedicated to helping people abroad, from rescue projects to operating welfare facilities.

Other Korean celebrities designated as PR ambassadors for the KFHI include Jang Nara, Cho Min-ki and Kim Tae-woo.

Yoon, 24, who debuted in 2009 with MBC’s sitcom “High Kick 2,” rose to stardom last year as the male lead in the hit-drama “Bread, Love and Dreams” (KBS, 2010) which breached viewership ratings of 50 percent and won him second prize in acting in the area of special drama production at KBS' year-end awards.