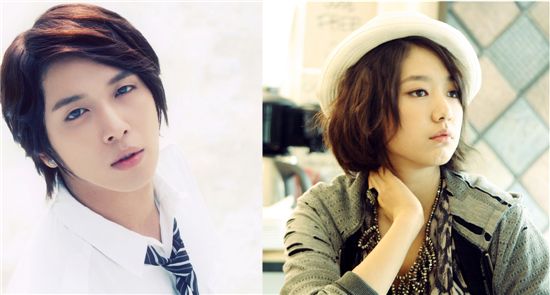 썝蹂몃낫湲 븘씠肄
Korean actress Park Shin-hye and CNBLUE leader Jung Yong-hwa have been cast as the leads in an upcoming MBC drama, making it the second time for the two to work together in two years.

Tree J. Company announced in a press release on Wednesday that Park will play the female lead named Lee Kyu-won who is studying Korean traditional music and an expert in gayageum (Korean harp), while Jung will take on the role of Lee Shin, the lead singer of a band and wins over the hearts of all the girls on campus, in the new series tentatively titled "Festival." "Jung has shown that he can act through his role in SBS' 'He is Beautiful' and we know that he is a talented musician as the lead singer in CNBLUE," a production official from the show was quoted as saying. He went to say that Park's cheerful and cute image fits well with the personality of Lee Kyu-won.

"Festival," helmed by director Pyo Min-soo whose works include "Full House" and "World's Within," tells the love story friendship among students studying at an arts college. The show is scheduled to go on air starting June 22.

Jung, who gained popularity through his appearance in TV series "He is Beautiful" in 2009, is currently the leader of four-member boy band CNBLUE. They rose to fame in Korea with their song "Alone" and the group is currently preparing the release of their first full-length album. Park first gained fame in Korea after appearing in hit TV series "Stairway to Heaven" (SBS, 2003) starring Kwon Sang-woo and Choi Ji-woo and rose to stardom throughout Asia after starring in "He is Beautiful" (SBS, 2009) also starring Jang Keun-suk, Lee Hong-ki and Jung Yong-hwa.