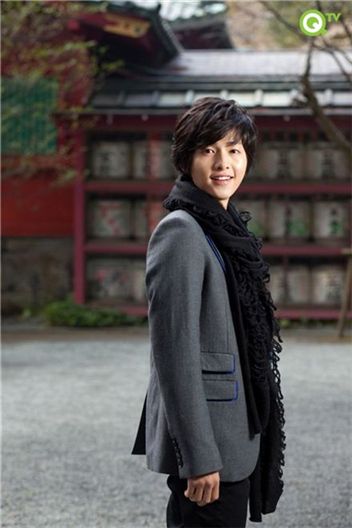 썝蹂몃낫湲 븘씠肄
A special TV program of Korean actor Song Joong-ki on his trip to Japan will air next month, according to the show's broadcaster QTV on Monday.

QTV announced through a press release that the show titled “I’m Real Song Joong-ki,” produced in two-parts, will go on air on February 4 and 10, while they also unveiled several photographs of the actor in Japan. The pictures show Song on his bed playing with his Galaxy Tab, reading a magazine at a stand as well as posing in front of a temple and one of himself in a restaurant.

Song kicked off his career in 2008 through the TV series "Love Racing" and has since appeared in "Frozen Flower" and TV series "Precious Sons," "Triple" and "Will it Snow for Christmas?"

He has also been the host for KBS' Friday music program "Music Bank" and recently starred in popular KBS' historical series "SungKyunKwan Scandal" alongside Park Yuchun, Yu A-in and Park Min-young. ※ Any copying, republication or redistribution of 10Asia's content is expressly prohibited without prior consent of 10Asia. Copyright infringement is subject to criminal and civil penalties.