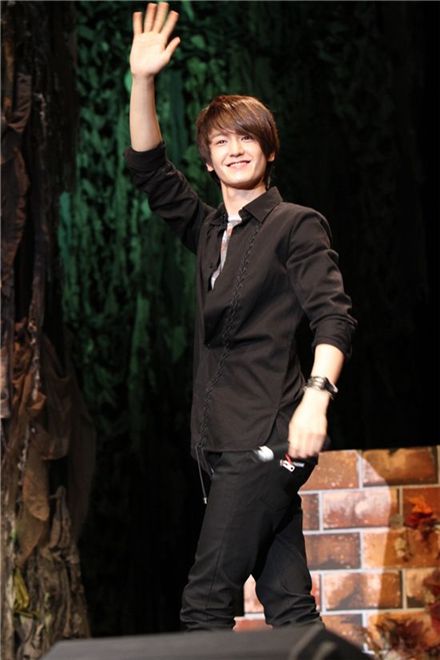 썝蹂몃낫湲 븘씠肄
Korean actor Lim Ju-hwan held his first ever meet-and-greet in Japan over the weekend.

A press release from Trophy Entertainment announced that the actor was in Japan for his fan meeting titled "2010 Lim Ju-hwan The Magic Hour" held at the Yamano Hall on October 24. The actor held various events for some 1,000 fans including a talk show and games regarding his works "Tamra, The Island," "Mr. Kimchee and Ms. Teriyaki's Wedding War" and "What's Up."

He also celebrated the one-year anniversary of his official Japanese fan club as well as performing the song "This is the Moment" from the "Jekyll & Hyde" musical and "You & I" by 2NE1 member Park Bom.

"I was happy to see my fans and make special memories even though it was a short time," Lim was quoted as saying, adding that he will work harder in the future. Meanwhile, a day before his fan event, Lim attended an autograph session for Mnet Japan's "Mnet X Mito Excel Korean Entertainment" at the Ibaraki Prefecture [located in Kanto region on Honshu Island] to help promote Korean artists in the country.

Lim, 28, made his debut in 2004 with a role in the SBS TV series "Magic," and has since appeared in other dramas such as KBS's "Snow Queen" and "Boys Over Flowers." He was also in several movies including "Frozen Flower," "Arang" and "A Millionaire's First Love."