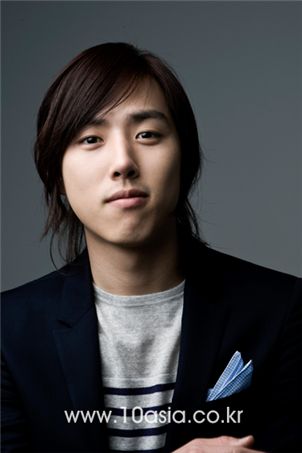 썝蹂몃낫湲 븘씠肄
My name is Baek Sung-hyun.
I was born on January 30, 1989.
I currently live in Gwangmyeong-si which is in the Gyeonggi Province. It's a lot better living there now because I can drive but before Gwangmyong was a kingdom in itself. You had to take care of everything within the city -- from daily necessities to enjoying a cultural life. It's kind of unfortunate that the distance keeps me from becoming close with my fellow actors. It's not a big deal going out to Seoul but after having a couple of drinks, getting back home becomes a problem. That is why I begged my mom if I can live on my own. If I get to live alone I think I would like to live in Sadang because it's close to Kangnam, the transportation is good and actor Hwang Jung-min lives near there too.
I would consider myself a heavy drinker. I heard that you inherit your capacity to drink from the person two generations above you. So I think I take after my grandfather because he is a heavy drinker as well. I can drink three bottles of soju and feel fine. I think I don't have any drinking habits in particular either. I just go home if I'm drunk. Sometimes I pass out from drinking but when I wake up I'm home. I have never lost my wallet or cellular phone from getting too drunk. I once even took a shower before I went to sleep even though I blacked out. I've made any mistakes out of drunkenness before but I once mistakenly fell asleep on the steps of an apartment because I was trying to find shelter from the rain. I could have just gone home but I only thought about going in to some building. From then on, I've been more cautious when I drink.
I played the role of Joong-won in the movie "Marathon" which I think I 'screwed up' on. Most of my scenes were omitted. My character was supposed to play a bigger role in the film but I didn't act well so a lot of my scenes got cut. I think it's because it's when I was frustrated what acting was about.
In the movie "Our School's E.T" I played a character that does boxing, so I trained like crazy for six months. That is how with just one punch, I once even broke the nose of my opponent. I'm the type that usually learns things for just about a month like guitar or working out but when it comes to preparing for a role in a drama or movie, I really focus on it.
The scene I am most disappointed about in "Blades of Blood" is when I aim my knife at Baek Ji (played by Han Ji-hye). I threaten her not to follow me even though I love her but I don't think I did a good job in showing my inner conflict with that. I think I should have shown that I am conscious of Hwang Jeong-hak (played by Hwang Jung-min) standing behind me.
Director Lee Jun-ik said that "Cha Seung-won is like sports car running on the asphalt with the correct directions and Hwang Jung-min is a wild horse-like SUV racing off the road." I think that it is true and I hope to acquire both characteristics in myself.
It was my idea to have my mustache grow out. As the story develops, my character Kyeon-ja's mustache becomes darker. When it first began to grow, the hair was thin and sparse but became dark by the time I was fighting with Lee Mong-hak. I wanted the mustache to show that Kyeon-ja had matured. And if he was too clean-cut, I think he would have given off less of the vibe that he was desperate.
I would like to try playing the role that Viggo Mortensen did in the movie "The Road." How a father sacrifices himself for his son even when he is in an extreme situation. If it was me, I would have hit my son and said "Hey! Get your life in order!"
I would like to become close friends with actors Lee Jun-ki and Jang Keun-suk who have worked with director Lee in his previous productions. I wish I had a chance to meet them in person to say hello. Hopefully, after they read this article they will consider meeting with me.
Basketball is the most important and fun thing in my life outside acting. I go to the indoor gym in Gwangmyeong to play almost everyday if I don't have work. It's the place where the best basketball players come to play. My friends and I get together and we'll split up into two teams: A level and B level. I barely made it into the A level team. The people that I play with are so good that I realized basketball is a stressful game. I think I'm currently the lowest ranked person on our six-member team. I am the shooting-type and when we practice, I get all my shots in but just not when we're actually playing a game.