Korean actress Park Shin-hye (left) and CNBLUE leader Jung Yong-hwa (right) at the reading for MBC's "You Have Fallen For Me" on May 2, 2011. [Tree J. Company]

CNBLUE leader Jung Yong-hwa and actress Park Shin-hye have held the first script reading for their upcoming drama, according to the show's promoter Tree J. Company on Wednesday.

Tree J. announced in a press release that along with Jung and Park, actor Song Chang-eui, actresses So E-hyun and Woo Ri as well as CNBLUE drummer Kang Min-hyuk took part in the first script reading session for "You Have Fallen For Me (translated title)" on May 2. "The atmosphere was a bit awkward since it was the very first time that the main and supporting cast gathered together in one spot," an official with the show was quoted as saying. "But once the reading session began everyone relaxed and it felt like one big family."

"You Have Fallen For Me" tells the story of Lee Kyu-won (Park) who is studying Korean traditional music and an expert in gayageum (Korean harp), while Jung will take on the role of Lee Shin, the lead singer of a band who wins over the hearts of all the girls on campus.

The drama, which will premiere on June 29, will be helmed by scenarist Lee Myung-sook and producer Pyo Min-soo whose previous works include hit melodramas such as “Full House” (KBS, 2004) and “Worlds Within” (KBS, 2008). 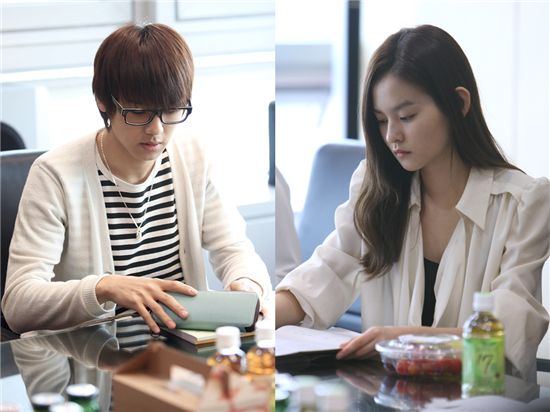 CNBLUE drummer Kang Min-hyuk (left) and actress Woo Ri (right) during the first reading for MBC drama "You Have Fallen For Me" on May 2, 2011. [Tree J. Company]