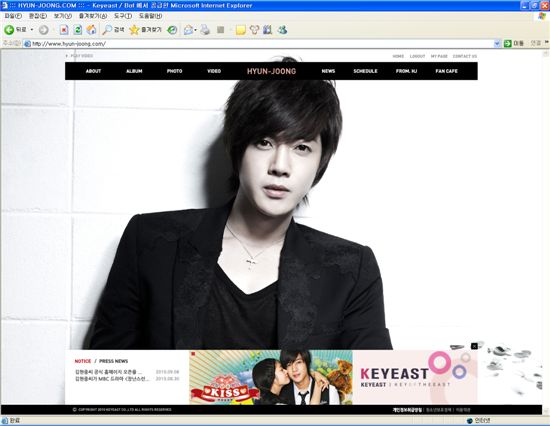 KEYEAST announced in a press release that they have created the official webpage (http://www.hyun-joong.com) through which Kim will be able to communicate with his fans. The main page of the website features a video and pictures from a photo shoot while the site provides an introduction of his albums and activities with his boy band SS501, updates on his official schedule and other never-before-seen pictures and videos.

He even uploaded a welcome video message titled "FROM. HJ" to his fans saying, "I will work hard to deliver good news to you as much as possible."

Kim made his debut as the leader of the popular Korean group SS501. He became a huge star throughout Asia starring in last year's smash hit TV series "Boys Over Flowers" alongside Lee Min-ho and Ku Hye-sun. He is currently playing the role of Baek Sung-jo in MBC's Wednesday and Thursday drama "Naughty Kiss," the Korean small screen adaptation of Japanese comic series "Itazura na Kiss."