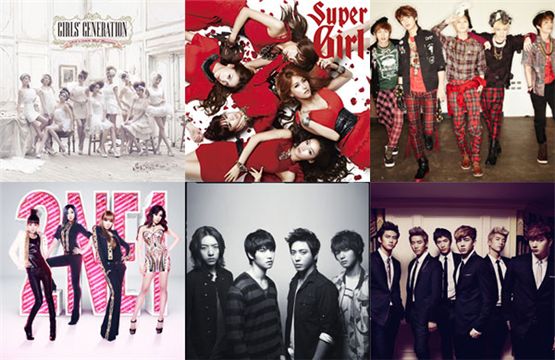 A number of top Korean idols have been nominated for the upcoming MTV Video Music Awards Japan (MTV VMAJ).

On Tuesday, the official website of MTV VMAJ 2012 showed that Girls' Generation's album of the same name and KARA's "Super Girl" received nominations under the category of best album of the year. The nine-member girl group, Girls' Generation, was also nominated for best video of the year for their music video "MR. TAXI" while SM Entertainment labelmates SHINee will compete against other international singers for the best choreography award for their song "LUCIFER."

2PM received a nod in the best group video category for "I'm Your Man" and CNBLUE's "In My Head" and 2NE1's "I am the Best" were both nominated under the best new artist video segment.

This year, the MTV VMAJ 2012 will be hosted by popular Japanese electro trio Perfume and take place at the Makuhari Messe Hall in Chiba on June 23. ※ Any copying, republication or redistribution of 10Asia's content is expressly prohibited without prior consent of 10Asia. Copyright infringement is subject to criminal and civil penalties.