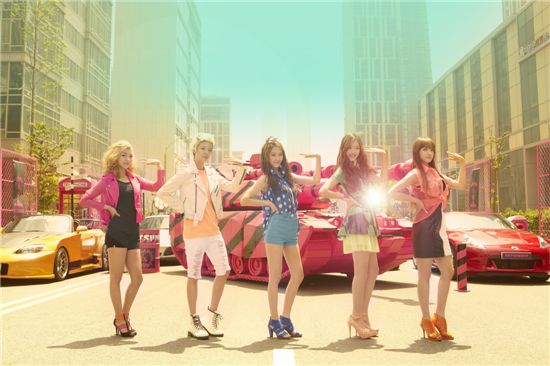 Five-member girl group f(x), prepping for their comeback to the local music scene, will premiere the full-length music video for "Hot Summer" tomorrow, according to their agency SM Entertainment.

On Thursday, SM announced in a press release that the full-version music video of f(x)'s title track "Hot Summer" from their repackaged first full-length album will be posted on the girls' official website and SM's YouTube channel on June 17.

Earlier this week, the girls unveiled a 30-second teaser video of "Hot Summer" which raised anticipation amongst fans on their return.

"Hot Summer" will be the title track for the repackaged version of their first regular album "PINOCCHIO," while the upcoming release is composed of ten original songs from the aforementioned record and three other new tracks "...Is It OK?" for the soundtrack of SBS' drama "Paradise Farm," and newly arranged versions of "LA chA Ta" and "Chu~♡."

The girls had revealed "PINOCCHIO" on April 20 and claimed a number of wins on various televised music programs and online music charts with its title track "Danger." f(x), formed of members Victoria, Luna, Krystal, Amber and Sulli, made their debut in September 2009 with single "LA chA Ta." They will begin promoting "Hot Summer" starting with their comeback performance this Friday on KBS' televised music program "Music Bank."