FTIsland to tour Japan in June 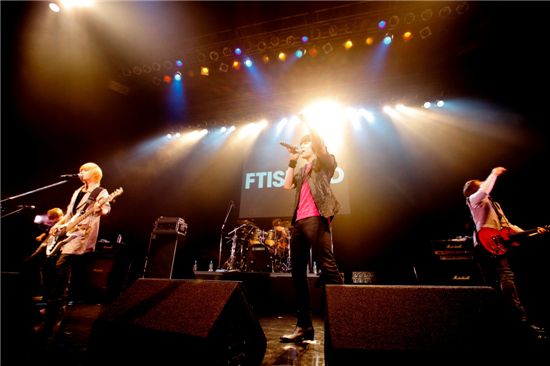 Korean rock band FTIsland will kick off their nationwide tour in Japan in June.

The announcement was made during their special event titled "SATISFACTION SPECIAL" on April 23 and 24 in Tokyo and Osaka, respectively, celebrating the release of their latest single "SATISFACTION" which went on sale in the country on April 20.

"We will kick off our nationwide tour in Japan this summer and our final performance will be held at Nippon's Budokan on July 29," the members of FTIsland said during the event, making them the first Korean band to take the stage at the venue.

FTIsland's "Tour 2011 Summer Messenger" will begin in Nagoya on June 29 be followed by shows in Osaka on July 2, Tokyo on July 6, Fukuoka on July 8 and end with their last performance at Budokan.

In the meantime, their past weekend event continued with the group's performance of "Friends" and "I Want" and FTIsland's leader Choi Jong-hoon revealed that he is currently working on a Korean movie while other members are composing new songs. The five-member band ended the festivities by taking the stage with title track "SATISFACTION," the ending theme song for Japanese animation "toriko," which began its air on Fuji TV in early April.

Composed of other members Lee Hong-gi, Song Seung-hyeon, Lee Jae-jin, Choi Min-hwan, FTIsland released their first album "Cheerful Sensibility" in 2007 and followed it up with several singles and studio albums including "Colorful Sensibility," "Cross and Change" and recently "beautiful journey."

They expanded their career into Japan in 2008 with two single albums “Flower Rock” and “Brand-new days" and has seen three of their singles rank within the top 10 slots of the Oricon albums chart.

The group will also release their first full-length album in Japan "FIVE TREASURE ISLAND" on May 18.