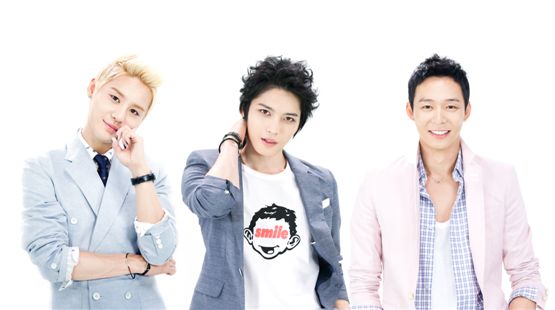 JYJ has gotten back together again as the new face of the Korean cosmetics brand TONYMOLY.

While actively pursuing their solo activities on stage and TV, JYJ's Kim Junsu, Kim Jae-joong and Park Yuchun have been named the new face of TONYMOLY, C-JeS Entertainment said in a press release Monday.

Under the contract, JYJ members will be promoting the company's cosmetics products for the next 12 months throughout Asia, excluding Japan, and start to appear on TONLYMOLY's TV commercials and other advertisements starting this October.

"JYJ is without a question the most beloved Hallyu idol group in Asia. As TONYMOLY is seeking to expand our market abroad, we are expecting JYJ to help promote the firm's image," TONYMOLY Marketing Director Kim Seung-chul was quote as saying.

Girl group T-ara members were originally the faces of the brand, until they were allegedly rejected to extend the contract due to the long-lasting controversy over the "Hwa-young" incident and inappropriately coping with the public's anger. Meanwhile, Actress Min-lyn is also on board as she penned her modeling contract with the firm last month.