TVXQ! Changmin's Japanese film to open in theaters in November 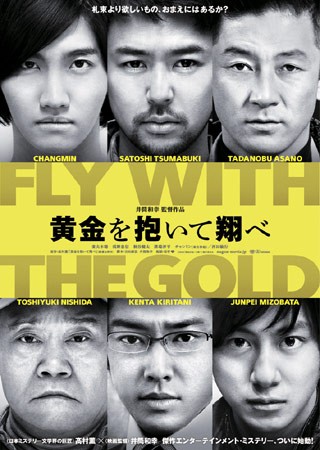 An action-packed Japanese film starring TVXQ! member Changmin is set to open in theaters this November.

"FLY WITH THE GOLD," co-starring Japanese actors Tsumabuki Satoshi, Asano Tadanobu, Kiritani Kenta, Mizobata Junpei, and Nishida Toshiyuki, will hit the silver screen on November 3, according to the film's official website on Wednesday.

Based the best-selling novel "Fly Holding a Golden" by Takamura Kaoru, Changmin's upcoming movie will tell the story of six guys coming together to steal 240 billion yen worth of gold bars. He will play a North Korean spy who disguises himself as a college student that works with the burglars.

Changmin made his singing debut in five-member boy band TVXQ! in 2004, which is one of the most popular boy bands in the country and overseas. The team later refreshed its lineup to two members as three members from the team -- Kim Junsu, Kim Jae-joong and Park Yuchun -- formed trio boy band JYJ.

Meanwhile, Changmin expanded his career into acting with his first lead role in SBS' TV series "Paradise Farm" which aired in Korea for two months in March last year. The show also made its premiere in Japan last year and the show's DVD sales figure has been showing off some promising numbers, even placing within the top ten of Oricon's weekly chart soon after the release.

As a member of TVXQ!, Changmin is waiting for the release of their new Japanese single "ANDROID" due out on July 11.