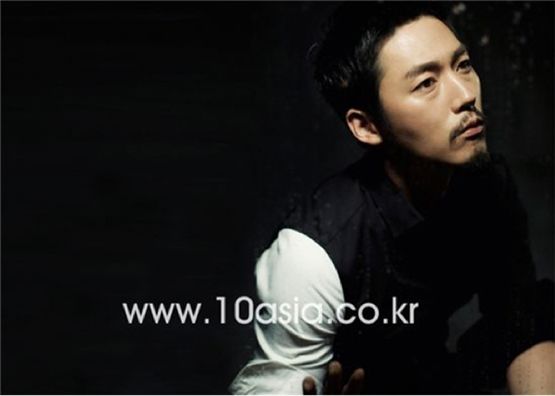 The modifier 'fairy pitta,' a bird with seven hues of feathers which refers to one having many charms, is often used when speaking of the virtues required of actors. The ability to blend into whichever world they are placed into is definitely a weapon. But sometimes, it is more interesting to see them win people's attention when they are in a realm they can dominate completely. Just like how Jang Hyuk is better suited for historical dramas and the dynamism of his bodily movements are better expressed when he is in a traditional Korean overcoat then than modern day menswear.

Following his role as Dae-gil in KBS' "The Slave Hunters," Jang Hyuk is now creating impressive moments as Chae-yoon in SBS' "Deep Rooted Tree." Chae-yoon, great at martial arts and with a wound from his past, is similar to Dae-gil who lived with revenge in his heart. But Jang Hyuk says the two are different. "Chae-yoon's martial arts doesn't exist for the fanciness of the action sequences. The drama itself isn't a historical action drama but closer to an investigative series. Chae-yoon can't sleep because he's neurotic. While Dae-gil was a character who wasn't affected much by yesterday, today and tomorrow. For him, everyday was today. He lived because he'd open his eyes and his world would close when he shut them. But Chae-yoon had such a traumatic childhood that he can't sleep at night. He only lives in the past. There's no today or tomorrow for him." Hence Jang Hyuk's role as Chae-yoon in TV series "Deep Rooted Tree" is the only thing he thinks about these days but what usually makes him excited is movies. His hobby is to watch movies, his job is an actor and his dream is to write a movie script. Even the music he likes are the original soundtracks to movies. Hence if one got to look into his mind, what remains outside of movies may be very small or even just a little dot. Below are his choices of cinema music that he said were more powerful than the movies themselves.

썝蹂몃낫湲 븘씠肄
1. "Two Hearts" from "True Romance" OST
Jang Hyuk's first recommendation was the original soundtrack to film "True Romance." As a young man and woman fall in love, the fallen city of Detroit goes from being desolate to nonsensical. Incidents such as drug organizations and murder, which are set forth as the movie moves forward are frightful but such are merely romantic obstacles to these two innocent lovers. And music is the largest aide to this couple who fight off the obstacles to their love like Romeo and Juliet do. "The music in general has a vibe to it that makes it seem like music you'd hear in Africa. But it came out against the backdrop of Detroit so I liked that it gave the movie an eerie vibe yet vigor."

썝蹂몃낫湲 븘씠肄
2. "Quizas, Quizas, Quizas" from "Canta Espanol"
"In college, I tried to watch as large of a variety of movies as I could being a film major. And that is when I came across 'In the Mood for Love.' But it was when I was older that I actually came to like it. The movie wasn't of a sentimentality that could've been felt when I was young. There was an extremely strong matt vibe to it, sort of a loneliness, which could be compared to a lump of grass growing out of a cement floor. And of course, its music expressed that sentimentality well." The disappointment the man and woman feel from the realization that the love they shared was something that they will never again get to experience, can be expressed through the song "Quizas, Quizas, Quizas." "If, if, if," telling of the feeling the lovers will live with for the rest of their lives from that brief moment that may have been the most beautiful time of their lives, is sung by Nat King Cole.

썝蹂몃낫湲 븘씠肄
3. "Rocky" OST with "Gonna Fly Now"
"'Rocky' is a movie that I watch so often that I listen to its music often as well. I like the first movie and 'Rocky Balboa' the most, as well as the soundtracks to them and the fact that Sylvester Stallone wrote its script when he was having a hard time and made it with his friends." Some movies go beyond being just hits and gain fame for eternity. One can easily think of unknown boxer Rocky Balboa (Sylvester Stallone) upon hearing the first measure to the famed theme song "Gonna Fly Now." The scene where he climbs the stairs of the Philadelphia Museum of Art while shadow boxing always burns with challenge and passion.

썝蹂몃낫湲 븘씠肄
4. "Maria elena" from "Instrumental Pieces Korean Love the Most" (translated title)
"I watched a lot of Hong Kong movies in middle and high school. I would automatically rent and watch every new video that would come out in the video store of my neighborhood. 'Days of Being Wild' is a great movie but so is its music. And I'd never leave it out when talking about cinema music that left a strong impression on me." Yuddy (Leslie Cheung), who could not settle anywhere, dances alone. And this is the music that played. "Maria elena," which many think of when thinking of Leslie Cheung, is better known to us from commercials and popular songs. Yet it is the most beautiful when matched with the melancholy air Yuddy gives off as he is always lonely despite meeting many women.

썝蹂몃낫湲 븘씠肄
5. Ennio Morricone's "Once Upon A Time In America" OST
"Once Upon A Time In America" is by Ennio Morricone who has created many masterpieces for movies. The story, close to a chronicle of each character, gains depth with his grand orchestra. The melodies, resembling its masterpiece which depicts on life through a movie, presents a joy and rapture to viewers. “I think 'Once Upon a Time In America' is about memories. And Jennifer Connelly was beautiful in it. [laughs] She's an actor I really like that was very pretty in this movie. And the music that Ennio Morricone made, needless to mention, was great."