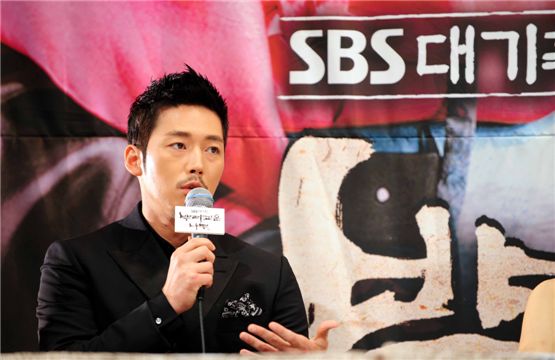 Jang made the remark during the press conference held in Seoul on Thursday for the new historical saga while telling local reporters that he initially had no thoughts to take on his character Kang Chae-yoon, a low-level guard for the King. "I didn't find Kang that appealing since there were far more interesting characters to the show's original story," Jang said. "But after reading the synopsis and script, I realized that my character had been dramatized."

"Kang seemed to have become the narrator of the show and as the drama progresses, he became more rich in character and just different from who he was in the original work," Jang explained.

"Deep Rooted Tree," the small screen adaptation of a novel by author Lee Jung-myung, tells the story of Kang Kang investigating a case involving the serial murder of Jiphyeonjeon scholars in the Gyeongbok Palace while the king (Han Suk-kyu) comes to create the Korean written language a few days later. The show, also starring Korean actress Shin Se-gyeong and Song Joong-ki, will take over the Wednesday and Thursday primetime slot starting October 5 after current series "Protect the Boss" finishes its run.