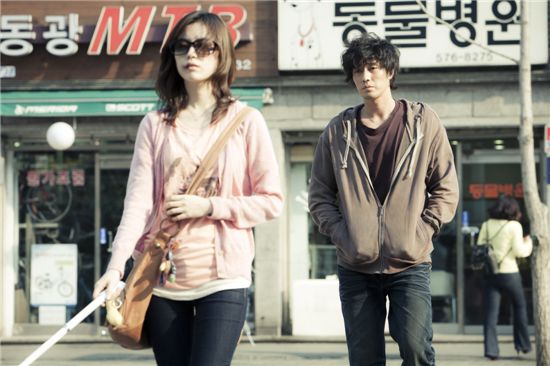 Film "Only You" [Showbox]

A local film titled “Only You,” starring actor So Ji-sub and actress Han Hyo-joo, went into shoot late last week, according to the film’s distributor Showbox on Monday.

A press release by Showbox said today that the film depicting on the love between a former boxer and a blind girl cranked in last Thursday.

In "Only You," So plays a former boxer with a rough personality who makes a living by delivering water and managing parking lot while Han is a woman who may be going blind but is strong in spirit.

The film, which is helmed by critically acclaimed director Song Il-gon whose previous works include "Flower Island" and "Spider Forest," is set to premiere around late half of this year.

Han, 24, rose to stardom throughout Korea and Asia after starring as a heroine in several hit dramas including “Brilliant Legacy (2009)” and most recently appeared in historical drama "Dong Yi - Jewel in the Crown. (2010)" This will be her first time since 2009 to take a role on the big screen since starring in "Postman to Heaven" also featuring JYJ member Jaejoong.

So, 33, is one of the most popular actors in Korea and has appeared in numerous TV dramas and movies since his debut in 1996. He became a household name in Korea and Asia with his roles in 2004 hit series "Something Happened in Bali" and "I'm Sorry, I Love You."

Most recently, he starred in MBC's war epic "Road No. 1" alongside Hallyu star Kim Ha-neul and Yoon Kye-sang.