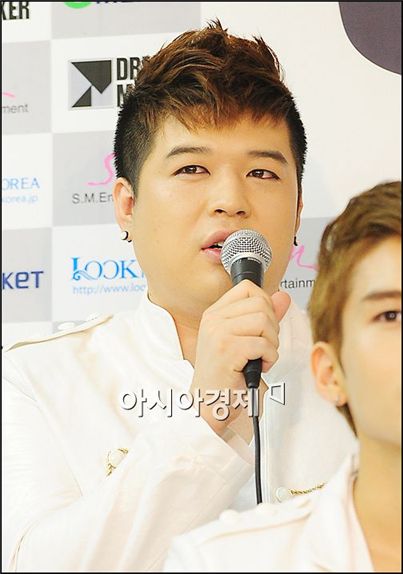 Super Junior member Shindong has stirred speculation that he may soon get married to his girlfriend.

While talking about a conversation he had with top Korean actor Jung Woo-sung, Shindong said on yesterday's episode of SBS variety show "Steel Heart" that Jung had told him he wants to attend Shindong's wedding. "He said that he really wants to be at my wedding and that he hopes it's on a day that doesn't conflict with his schedule," the singer remarked.

Host Kang Ho-dong asked if that means the date of his nuptials will be anytime soon, to which the boy band member replied, "Coming soon."

In May, the singer had taken the public by surprise when he proposed to his girlfriend through a secret code in their fourth full-length album "BONAMANA." "Nari, let's get married, I'm proposing to you, I'll love you, forever," the code read. He then proposed to his girlfriend on national television, saying "The one thing I most realized since meeting you is that my heart aches when you are not with me. I felt that I was always happy when you are with me. I want you to be happy with me forever. Marry me.”

However, an official from SM Entertainment denied a wedding was imminent. “The two families haven't arranged a formal meeting with each other yet because of their schedules. Shindong and Jung Nari (his girlfriend) are not planning on getting married right now but they want to get their approval," explained the official.

Shindong made his debut in the 13-member boy band Super Junior in 2005, releasing numerous hit records and songs including "Sorry, Sorry," "It's You," "Rukkugo" and "BONAMANA."

Outside of his singing career, Shindong has appeared on various entertainment programs as well as hosting his own radio show.