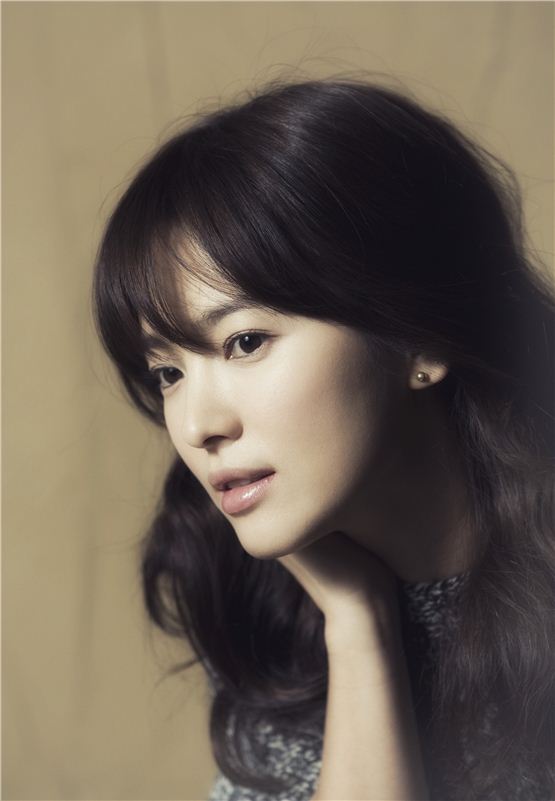 Song Hye-kyo poses in front of the camera before an interview with 10Asia. [Lee Jin-hyuk/10Asia]

Song has finally decided to star in KBS' new TV series “That Winter, The Wind Blows" [translated title], set to air in the first half of next year, promotion firm Shall We Talk said in a press release Friday.

With the news, many advertising companies and overseas distribution firms are welcoming Song's appearance with open arms, since she is regarded as a big fish in the business.

While staying out of the local screen, she has been taking part in foreign films such as Wong Kar-wai’s “The Grandmasters” and John Woo’s “Love and Let Love.”

“After Song confirmed her role in the series, we have been receiving a flood of investment and buying offers from abroad. The drama is expected to be one of the hottest soap operas in 2013 for both domestic and international market watchers,” an official from the production said in the statement. Song will pair up with the acclaimed director and writer duo Kim Kyu-tae and Noh Hee-kyong in three years after teaming up for KBS’ series "WORLDs within" in 2008. The directors are also known for producing jTBC's hit series "Padam Padam" (2011-2012),

The serious melodrama will tell a true love story of a top gambler [played by Zo] and a lonely woman [Song]. Abandoned by his parents, the man lives a meaningless life until he finds a woman who desperately tries to protects herself from getting hurt by other people.