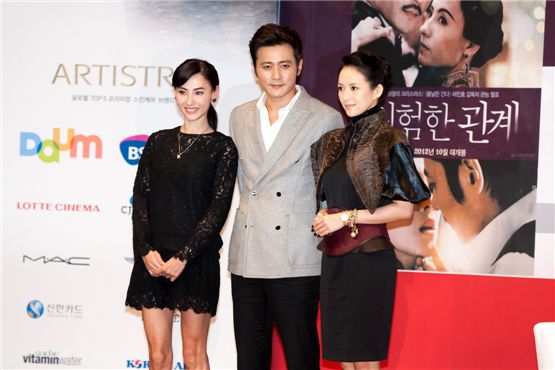 The cast roaster cannot be any better, and it seems the three dangerous Jangs are about to do something big with director Hur Jin-ho's remake of "Dangerous Liaisons."

Korean actor Jang Dong-gun, Chinese actress Zhang Ziyi and Cecilia Cheung, whose last names are all written and pronounced "Jang" in Korean, may now be known by the new nickname here once "Dangerous Liaisons" hits local theaters on October 10.

Questions to the cast members did not stop during an hour-long meeting with reporters from around the world at the pic's Gala Presentation arranged after the screening during the 17th Busan International Film Festival [BIFF], held at the Shinsege Centum’s Culture Hall in Busan, Friday.

Though there were some worrisome voices over a Korean director helming a Chinese movie, the audience members were generous towards the outcome in overall after the screening.

"The original 'Dangerous Liaisons' made in 1988 is very famous and has been produced into different forms of art. This shows how excellent the original piece is. If 1,000 people watch the film, we can expect 1,000 different remake versions," Zhang expressed his impressions about the original and Hur's. "As an actress, this allows me a huge space to study the character. I'd also like to give a big hand to Hur for bravely signing on to produce a movie in Chinese. There's already a Korean remake of the pic and also pulled off a huge success, but he was up for the challenge and made a new 'liaisons.'"

Meanwhile, Hur's motivations for the challenge was more simple than expected, as the director says it all began simply from his curiosity. Detailed depiction of emotions such as jealousy and desire in the story caught his attention once he was offered the job from a Chinese production firm.

"When I read the original novel, I instantly understood why it has been produced into countless number of remakes. Jang and I jokingly told each other that we would have been more popular with ladies if we read this at a young age," the director said, adding that it was a new experience for him to have three main characters in his movie, whereas his previous works focused on just two characters.

Cheung also supported Hur's opinion that the movie is a great bible to people's eyes on the true meaning of relationships and see what is important about connecting with others.

"Watching a woman finding her true love and willing to give up anything to secure it, one can think about his or her life and attitude towards love. I'm so happy to feel like I'm still in the story."