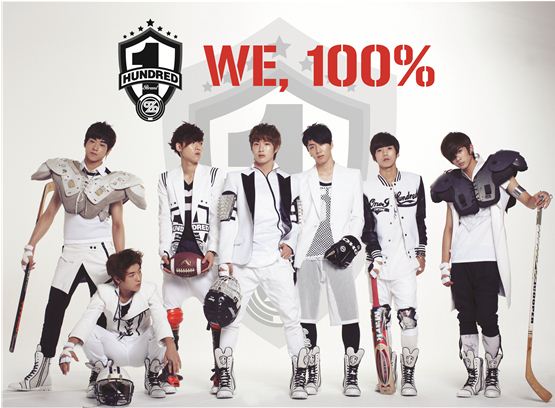 Named 100% [100 percent], the rookie boy band will put on their first televised performance of the debut single “Bad Boy”on KBS “Music Bank” Friday, according to the agency's press release sent Monday. “Bad Boy,” a dance tune with catchy beat, is the title track of their debut single “WE, 100%,” rolled out on September 18. The record includes two more tracks, the intro song of the same name as the album and “Still Again," an addictive electronic tune.

“100% is a skilled group, rich in musical talent and distinctive voice. I am looking forward to seeing their debut performance,” the record’s producer and songwriter Super Changddai was quoted as saying.

The seven-member boy group, consisted of five vocalists and two rappers, will continue to promote themselves on other music shows this week including MBC “Music Core,” and SBS “Inkigayo." T.O.P Media, founded by the Korean male group Shinhwa's member Andy, is one of the rising talent agencies here with the success of their first idol group Teen Top.