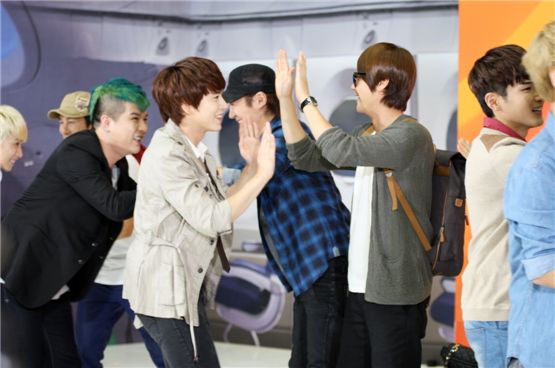 Super Junior's Shindong (left), Kyuhyun (second to left), Ryeowook (right) and Shinhwa's Hye-sung (second to right) greet each other on the set of jTBC's "Shinhwa Broadcasting" set to air on September 22, 2012. [jTBC]

Two top idol groups are to show a big match on jTBC's reality show next weekend.

Super Junior, who have been spying the local music scene with the group's latest tune "SPY," is to appear as guests on Shinhwa's reality show "Shinhwa Broadcasting" on September 22, the channel's PR reps said in a press release Tuesday. The officials said that they have already taped the special episode of the "Mr. Simple" singers and that the idols expressed their strong will to make Super Junior's own reality show, "Suju Broadcasting," to the jTBC producers.

Members from Shinhwa and Super Junior have already proved themselves as the perfect partners on a reality show early this year.

On March 21 episode of MBC's "Golden Fishery," Kyuhyun leaked funny happenings of Shinhwa member Lee Min-woo giving awkward advices to Super Junior members at a bar. What Kyuhyun said on the show that day spread fast online like a buzzword and Lee later thanked Kyuhyun at Shinhwa's 14th anniversary Seoul concert for putting him at the center of the public attention.

"Shinhwa Broadcasting" is multi-genred reality show of Shinhwa members that began its air on March 17, right before releasing their tenth full-length album "THE RETURN."