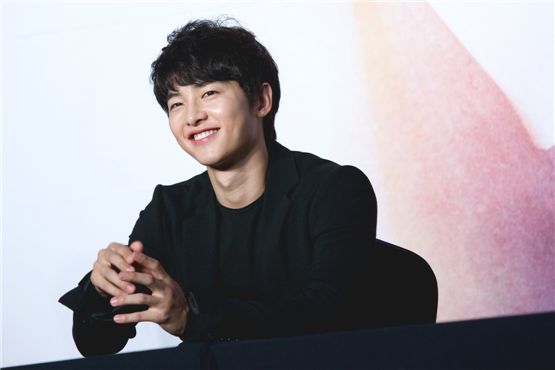 Korean actor Song Joong-ki has revealed his determination to become a mature and improved actor.

During "The Innocent Man" press conference held at the InterContinental Seoul COEX in Seoul on September 5, the "SungKyunKwan Scandal" heartthrob told reporters what was in his mind when he first took a character that is noticeably different from his previous roles. “I have no particular image that I want to pursue. I've never thought about that. When deciding my next projects and roles, the only things that concern me and that I ask my self are 'Am I able to pull off this character?,' 'Would this be fun?' and 'Is there anything new that I can show through this character?',"the young actor told reporters with confidence in his voice.

“I don’t try to change my persona. The reason why I'm on this drama is solely because I loved the scenario. Maybe I could get negative reactions from viewers but I thought I can grow as an actor. I'd be happy to go through growing pains,” Song added with a smile.

“The Innocent Man," set to premiere on September 12, centers around Kang Ma-roo [played by Song], a smart medical student getting burned by the love of his life, Han Jae-hee [played by Park Si-yeon]. Han is a former journalist that got married to a conglomerate’s C.E.O. After getting emotionally hurt from the relationship, Kang transforms from a nice guy into a bad one. To take his revenge on Han, he uses Seo Eun-ki [played by Moon], who struggles to be recognized by her father to become the successor of a family-owned company.