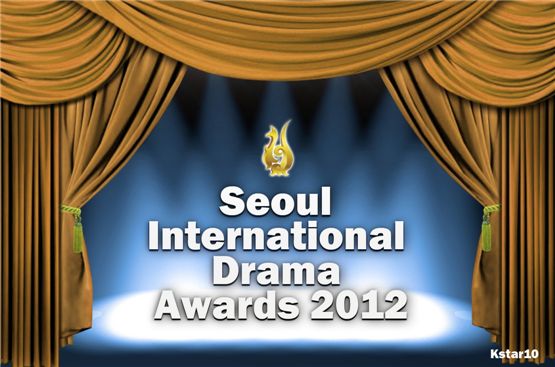 The 2012 Seoul International Drama Awards is just around the corner and this Thursday's awards ceremony is opening with 24 TV series nominated from 201 international submissions.

Including the shortlisted MBC "Moon Embracing the Sun" (2012) and "Deep Rooted Tree" (2011), organizers of the 7th SDA have carefully chosen some impressing Korean dramas aired between January, 2011 and May, 2012. But this is not enough to show how the small screen projects have been developing in its size and volume in Korea.

Kstar10 has selected six TV series aired during the period on three major broadcasters--SBS, KBS and MBC--which were just inches away from being nominated at the 2012 SDA. 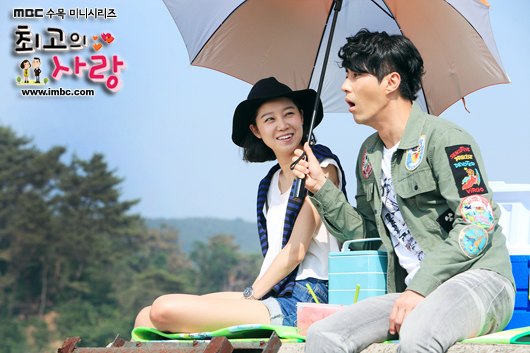 A still shot of Kong Hyo-jin (left) and Cha Seung-won (right) each playing Gu Ae-jeong and Dok Go-jin in MBC hit TV series "The Greatest Love," aired between May and June in 2011. [MBC]

The success of any well-plotted story hinges on how well-defined and realized the characters are. Especially when the drama revolves around the off-screen life of celebrities, who gets cast in the project highly determines how well the audience can immerse in the show. By taking its pairing with Cha Seung-won and Kong Hyo-jin, whom both had made moves in their career from modeling, the ‘Hong sisters,’ scriptwriters Hong Jung-eun and Hong Mi-ran known together professionally by penning scripts for romantic comedies like SBS “My Girl” in 2005 and MBC “Couple or Trouble” in 2006, marked a new era in the history of romantic comedy TV series. Fashion icon Kong and heartthrob Cha were the perfect choice of casting to portray Gu Ae-jeong, a former member of girl group looking for her shot to be back in the limelight, and Dok Go-jin, an arrogant top actor whose popularity has reached its peak. Like any popular TV series or movies that spawn quotes, “The Greatest Love” hooked people with the quote of the year, or ‘the sound effect of the year’: “Ding Dong.” While it is not a surprise that Kong had made another trend in fashion through playing Gu Ae-jeong, popularizing the minimalistic casual fashion called 'Gong Hyo-jin fashion' last year. The Hong sisters’ ambitious 16-part TV series clinched not a small number of coveted prizes at international TV festivals, including New York TV festival, MBC Drama Awards and Paeksang Arts Awards. 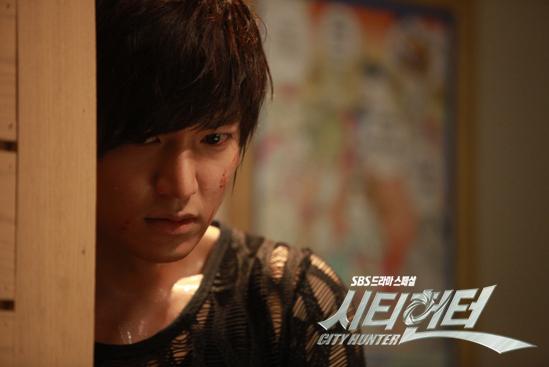 A still shot of Lee Min-ho in SBS hit TV series "City Hunter," aired between May and July in 2011. [SBS]

“City Hunter” is collaboration between Lee Min-ho and Park Min-young that helped the pair’s on-screen romance to develop into a real relationship. Perhaps it is the strong chemistry they had during the shooting that made the viewers empathize with the characters. But above all, TV critics gave credits for the writer and director’s attempt to engage in pressing social issues, such as employees contracting leukemia or lymphoma after being exposed to unhealthy working conditions in semiconductor factories ? which people assume is targeting Samsung, the biggest electronics manufacturer here. Being brave on shining a spotlight on a broad range of social issues, “City Hunter” kept its ratings high by focusing on elements that all comes down to the same conclusion: ‘Empathy.’ 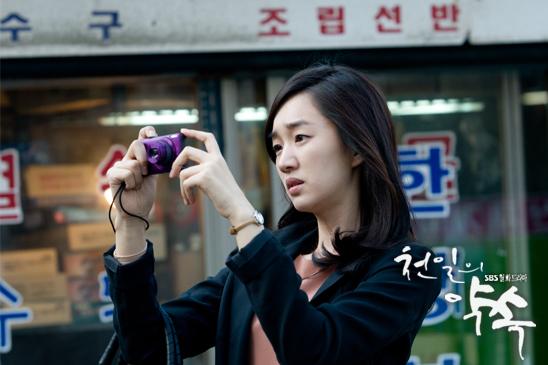 Soo-ae plays Lee Seo-yeon, who takes photos to help her remember her life due to Alzheimer's disease in "A Thousand Days of Promise" aired between October and December in 2011 on SBS. [SBS]

The story about a woman slowly losing her memory and a man suffering a great deal of pain due to his lovers’ irrecoverable disease sounds quite familiar. While it is understandable if someone points out that this is somewhat similar to 2004 hit romance pic “A Moment to Remember,” starring actress Son Ye-jin and actor Jung Woo-sung, Soo-ae has taken the drama to a whole new level with her delicate portrayal of Lee Seo-yeon, a 30-year-old career woman who has Alzheimer’s disease. Seeing Lee Seo-yeon gazing at herself in the mirror and wearing diapers when it was close to the last stage of the disease, many viewers had to break out in tears every Monday and Tuesday evening. While pulling off her role so well in the show, Soo-ae paid extra attention to her fashion. The actress’ feminine and chic style called ‘Soo-ae style’ was often used in advertisements of clothing brands. Though she may have died in “A Thousand Days of Promise,” her fashion code lived on.

Based on records, nearly all medical dramas that have aired in Korea had seen fairly good ratings and reviews. Adding to that assurance, an impressive roaster of veteran actor Jung Jin-young, “The Frontline” actor Shin Ha-kyun and actress Choi Jung-won was enough to predict the success of KBS’ TV series about neurosurgeons. What differentiated “Brain” from other medical TV series is that the director was able to stay in the track of focusing on the story of Lee Kang-hoon [played by Shin], a talented neurosurgeon that blames his poor and incompetent family background. That growth background has made Lee Kang-hoon a person with a high ambition to succeed, and he faces important events and a mentor that changes him to become a better person and a doctor. With its ratings peaking up to 17.9 percent in the first week of January, "Brain" rescued the broadcaster from suffering at the bottom of the Monday and Tuesday ratings chart. Also at the 2011 KBS Drama Awards, Shin and his opposite actress Choi earned the grand prize with the roles. 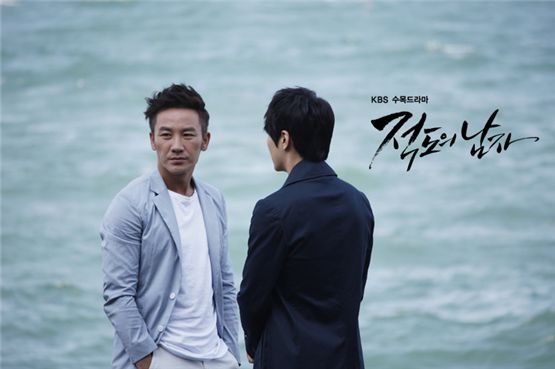 Actor Uhm Tae-woong in the still-shot of KBS "Man From the Equator" aired between March and May in 2012. [KBS]

“Man From the Equator” is an ingenious tale of friendship and betrayal. Though it was initially expected to go into a tight competition against SBS “Rooftop Prince” and MBC “The King 2Hearts,” of which both had strong casting power including singer and actors Lee Seung-ki and JYJ member Park Yuchun, “Man From the Equator” easily beat out the other two works for weeks during the run. This is one of the few TV series that culture critics describe as a TV series that has ‘perfect harmony between directing, script and acting.’ While many primetime dramas are criticized for leaning too much on romantic stories regardless of their genres, Uhm’s on-screen romance with Lee Bo-young did not interrupt the story’s flow. Gaining the title ‘master piece,’ “Man From the Equator” received mixed responses from the viewers toward its open ending. 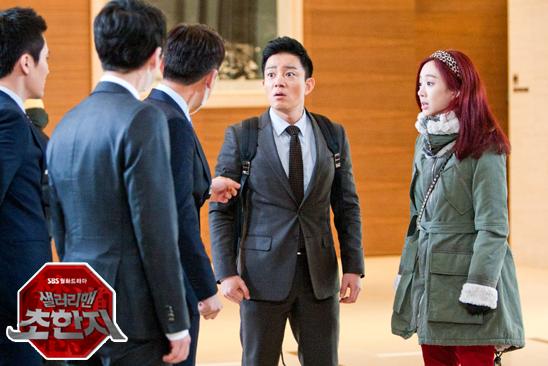 Actor Lee Beom-soo (left) and Jung Ryeo-won in the still-shot of SBS "Salaryman, Cho Han Ji" aired between January and March in 2012. [SBS]

Liu Bang, Jin Shi Huang, Hang Woo, Woo-hee and Yeochi. The unique name of the main characters tells volumes of the story’s unique setting. While the story revolves around the fierce battle between pharmaceutical companies to produce new drugs, the main characters are reincarnated from the historical figures in the Cho, Han and Ji dynasty. While such radical setting may have been experimental for the broadcaster to air during the primetime, SBS took their risk and raked in viewership ratings of 24.2 percent on the last episode. The comedy drama was originally scheduled to air only 20 episodes but due to increasing popularity during the run, it later got extended to 22. For Jung, this was her first hit in seven years after MBC’s 2005 mega-hit “My Name is Kim Sam-soon,” and provided a huge turning point for the actress. For Lee, meanwhile, “Salaryman, Cho Han Ji” was just another hit project that was added to his impressive filmography after SBS “On Air” in 2008 and “Giant” in 2010.