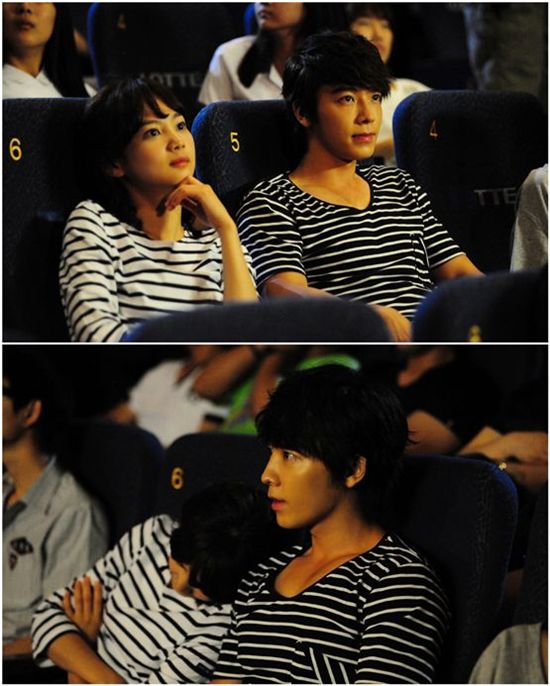 K-pop male idol Super Junior’s Donghae and actress Yoon Seung-a have been spotted together at a movie theater during the shooting for their upcoming drama "Miss Panda, Mr. Hedgehog."

On Wednesday, the show’s promoter YTree Media revealed still shots taken during the shooting that reveals the twosome enjoying a movie date wearing matching black and white striped t-shirts. In one of the unveiled photos, Donghae is shown with a surprised look on his face as Yoon falls asleep on his shoulder.

The romantic comedy centers around Go Seung-ji (portrayed by Donghae), a talented patissier who has a tender heart that is opposite to his cold persona.

He falls in love with Ms. Panda (played by Yoon), a cake shop owner who always keeps a positive attitude with a laid-back personality just like pandas. The weekend series of two stars will hit the airwaves on August 18 on Channel A, a Korean cable channel launched last December.

Donghae, a member of 13-member group Super Junior, has starred in Taiwanese drama "Skip Beat!" with his bandmate Siwon in December of last year.

In the meantime, Super Junior has been enjoying their reign atop various music charts with the latest title tune, “Sexy, Free & Single.”