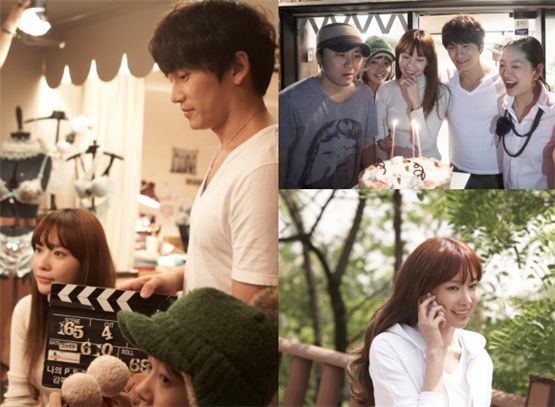 Snippets of actor Ji Sung and actress Kim A-joong shooting for the pair's upcoming romantic comedy have been revealed.

After three months of shooting, "My P.S Partner" (tentative title) officials released three photos on Friday that offer a glimpse into the casts' roles and how the shooting atmosphere was like.

Along with the pictures, the officials noted in a press release that the movie finally ended the shooting schedule on June 11 and is likely to open in local theaters this winter.

"I engaged in this project as if I'm a newbie in acting. I have a feeling that it's going to come out well and excited to see the result," Ji Sung was quoted as saying.

Meanwhile, Kim, who is returning to the silver screen in six years after her smashing hit "200 Pounds Beauty" (2006), thanked the production crew and said she will repay for all the attention by doing her best with post-production works. In "My P.S Partner," Ji Sung portrays a man named Hyun-seung who is obsessed about getting back with his ex-girlfriend, while Kim plays Yoon-Jung, a woman who tries to get her boyfriend propose to her by using all means.

Hyun-seung and Yoon-jung accidently gets to know each other when Yoon-jung presses wrong number to call her boyfriend. Without knowing that it is not her boyfriend that received her phone call, Yoon-jung tries to seduce Hyun-seung through the phone sex.

Making her debut with a mobile phone commercial in 2004, the "200 Pounds Beauty" actress last starred in SBS' hit TV series "Sign" in 2011, opposite actor Park Shin-yang.

Ji Sung, meanwhile, also left an impressive record with the last project, SBS' "Protect the Boss" (2011), and the show has been sold to about a dozen of Asian countries to date, including Japan, Ukraine and Hong Kong.