Super Junior to hold encore concert in Seoul next month 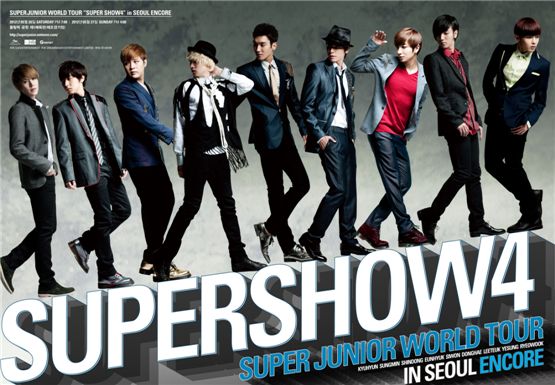 Top Korean idol group Super Junior is slated to hold an encore concert of their "SUPER SHOW 4," in Seoul next month, according to their agency SM Entertainment.

SM said in a press release on Monday that Super Junior will revisit the Olympic Gymnastics Stadium for their "SUPER JUNIOR WORLD TOUR 'SUPER SHOW4' in SEOUL ENCORE CONCERT" on May 26 and 27.

The firm also stated that the upcoming event will be revamped from their previous shows and will feature various solo and joint performances as well as their hit songs.

Ahead of taking their stage at the local stadium, Super Junior will take their "SUPER SHOW 4" to Jakarta, Indonesia from April 27 to 29 and to Tokyo, Japan from May 12 to 13.

Super Junior, known as one of the most popular boy bands in the country, enjoyed their successful comeback to the local music scene last year with “Mr. Simple.” With the track, they grabbed a number of wins on televised music programs and international online music charts. Outside of their group activities, each member has been pursuing his career in different areas of entertainment business such as musicals, TV dramas and variety shows.

The group’s world tour has been on the run for almost 6 months now since it kicked off in Seoul in November last year. The boys also held performances in Osaka, Japan, Taiwan, Singapore, Hong Kong and Bangkok.