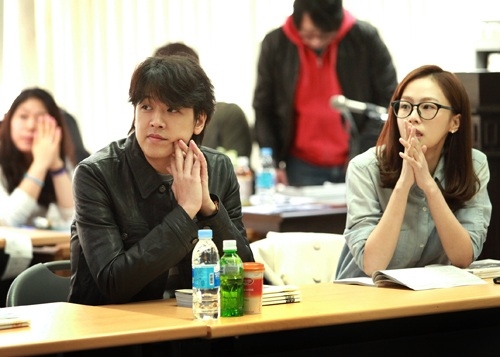 Hallyu star Ryu Si-won and actress Hong Soo-hyun has attended the first script reading for their upcoming TV series, according to the show's promoter Bliss Media.

A photograph of Ryu and Hong at the script reading for Channel A's new drama "Good-bye Wife," which is scheduled to hit airwaves on May 7, was revealed by Bliss through a press release on Wednesday.

"Both Ryu and Hong seemed enthusiastic during the first reading and they had a great connection. The pair looked like an actual married couple," an official with Bliss was quoted as saying.

Helmed by Kim Pyung-joon, "Good-bye Wife," chronicles the story of Cha (Ryu) and Kang's (Hong) marriage and the pair's break-up after Cha decides to leave his wife for his first love (played by songstress Park Ji-yoon).

The series was also pre-sold to Japan during the early stage of production after it has been announced that Ryu was cast to play the male lead. ※ Any copying, republication or redistribution of 10Asia's content is expressly prohibited without prior consent of 10Asia. Copyright infringement is subject to criminal and civil penalties.