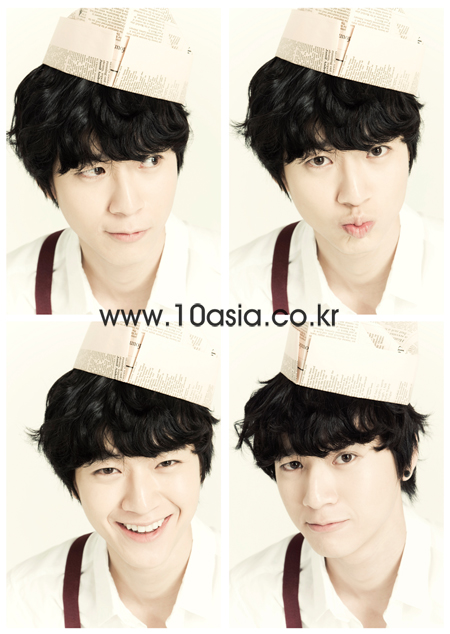 My name is Yoo Min-kyu.
I was born on September 18, 1987. My mom has a very cool personality while my dad is a bit timid in doing things. Oh, do you think it's okay for me to say this about my dad in the interview? My dad goes on the Internet a lot.
I have two sisters who are each three and five years apart from me. I don't like going shopping with my second sister. She takes too much time shopping and it's not like she buys the clothes that I recommend. I don't understand why she takes me with her. Or maybe she's expecting me to pay for her. No way, she knows that we're both short on money.
My oldest sister is studying film and my second sister is an art major. And the three of us have this plan to work on a project together because I am actor. But of course, I'm not going to work for free. I will have to get paid no matter what. (laugh)
My nickname was spider when I was in high school. I was really short back then and my friends called me the name because my torso was small and my legs and arms were too long.
I suddenly grew 10 centimeters during the summer vacation in eighth grade and I continued to grow since then. I received a thorough medical examination during my freshmen year in high school because I got scared of my sudden growth spurt. I received an MRI scan and had my growth plates examined and the doctor told me that I would grow up to 184 or 187 centimeters to tops. But that was a lie...I wish I was about two centimeters shorter.
I face some difficulties while acting because of my height. The directors I have worked with yelled at me often to bend my knees to balance with other actors. (laugh) There was this one time when one director told someone to lower the lighting and I immediately lowered myself thinking that he was talking to me. I think that just came out without me knowing it because I heard it so many times.
Honestly, I wasn't so happy when I received the offer to play Ha-jin. Especially when people have this image of me as a womanizer, I didn't want to play a character that's like it. I feel that I suit better with roles that look innocent and naive, rather than cassanovas.
I pierced my ears for the first time to play in "Shut Up and Let's Go." I don't really like accessories that much and wearing a wristwatch is just fine for me. I think it's cumbersome to wear earrings and a necklace. But it wasn't too bad piercing my ears and I will keep it that way.
Sung-jun is the best dresser among the band members in "Shut Up and Let's Go." I really like the vintage look but I don't think I can pull it off that well. Hyun-jae dresses well and I have yet to see Min-seok wear clothes that he matched by himself. And L, he hardly has time to pick out his own clothes. I saw his schedule and he's just swamped with work.
I like wearing suspenders and roll-up pants with my socks showing. So during the summer, I like to just wear a t-shirt and suspenders. Sometimes I purposely wear pants that goes down to my ankles and that makes people ask me if my pants are too short for me. (laugh) Oh, I also like wearing suits and jackets.
I have learned kendo for 17 years. I'm kind of shy to talk about this but I placed in the first in the national competition twice when I was in middle and high school. Your sight becomes better since you are wearing a mask and it's a great work out. A lot of people give up playing it, saying that it is too difficult but I thought it was really fun after two years.
I like all sports except playing pool. I'm quite passionate about playing sports and once I start to play something, I need to have all the proper equipments. Last year when I started bowling, I bought the equipments I needed and when snow boarding, I bought my own wakeboard. I don't really enjoy playing pool because you just stand around. I don't think I played it more than ten times. You call it sports when you sweat!
I like online games. I don't go to the Internet cafes and I usually play them at home. I'm currently playing the game LOL (League of Legend) which my friend suggested me to play. I used to play World of Warcraft and I was quite famous in that world. (laugh) I played in the Tirion server and my ID was Yoo Min-kyu.
I like superhero movies. My all time favorite is "Spiderman." I'm waiting for the next series to be out this summer. I really want to try action or sports genres. I would like to become someone like Kang Baek-ho from "Slam Dunk." I know that girls like the characters Seo Tae-woong or Yoon Dae-hyup more but personally I find Kang Baek-ho to be interesting. He's thickheaded but smart.