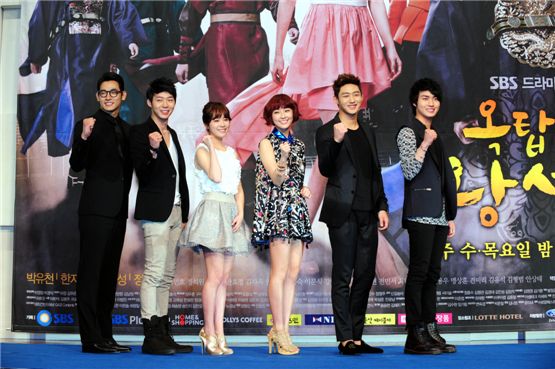 Failing to lead the way in terms of viewership ratings against its major competitiors on the Wednesday and Thursday primetime lineup for the past few months, most notably with the advent of MBC's mega-hit "The Moon Embracing the Sun," SBS says it is finally ready to reveal the ace up its sleeve and prep up for a new start. The main stars -- JYJ member Park Yuchun, actress Han Ji-min and the rest of the main cast -- attended a press conference in Seoul today for the new SBS comedy "Rooftop Prince." Starting with the preview of the drama that made the crowd of local reporters burst into laughter, the director of "Rooftop Prince" looked relieved with the people's reaction.

“It is the ‘timeslip’ that makes the drama more interesting,” the director said after the preview ended. “It will be fun to watch the casts and their depiction of their characters.” Sure enough, it was clear in the short four to five minutes of the video clip that the actors stayed immersed in their characters despite the change of time settings from the Joseon Dynasty to the present time. What did change was Park’s subtle approach in his acting that showed how the serious-looking prince slowly turns into a humane character, or, just a man in his age. 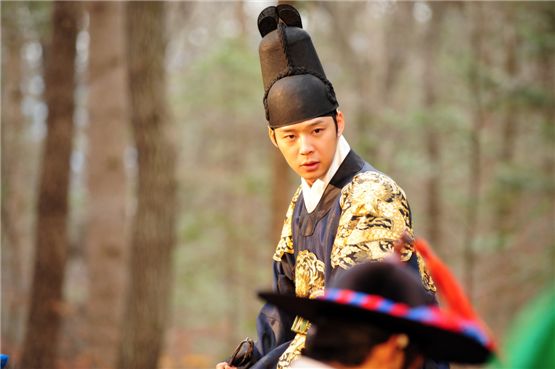 The story begins as Prince Lee Gak (Park Yuchun) from the Joseon Dynasty loses Park Ha (Han Ji-min), who he is deeply in love with, after an accident that leads her to death. Firmly believing that Park Ha’s death was plotted and that she was murdered, with his three courtiers he decides to visit the scene where an alibi said he had spotted Park Ha before she died. What was supposed to be a spot inspection turned into a 300-year trip after the four musketeers jump off a cliff, landing in a small and shabby room atop a rooftop in Seoul. There the prince is faced with his loved one once again though their relationship is of an intruder and as a house owner and they both fail to recognize each other. While trying to figure out the mystery of his magical experience, he gets a second chance in life to fall in love with Park Ha through a series of events he goes through in a world that seems to be a strange place for the prince. It is difficult to forecast the drama’s success just by seeing the trailer, but certainly, the comedy genre and historical setting appeared to have pulled out an odd harmony. Here are what the seven main actors, Park Yuchun, Han Ji-min, Jung Yu-mi, Lee Tae-seong, Jung Suk-won, Lee Min-ho and Choi Woo-sik, think about their upcoming drama which will air on March 14. 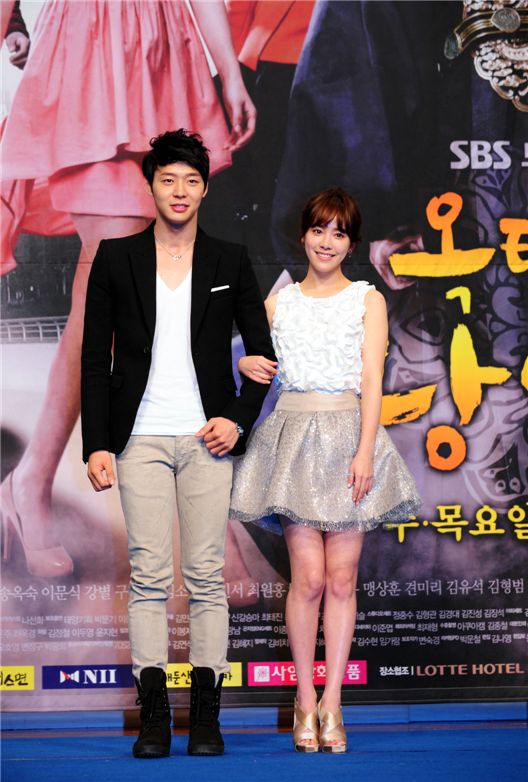 Park Yuchun: “For me, everything is new. I have to exaggerate my acting to show the image of a king from the Joseon Dynasty who suddenly wakes up in the future, but at the same time, I had to try hard to stay within the boundaries to avoid looking unnatural……I was in the historical drama ‘SungKyunKwan Scandal,' but the difference between the two dramas is huge. The mindset I have to have, the voice tone of a prince and everything else. I tried very hard to distinguish this character from any other roles that I have played."

Han Ji-min: “I think the biggest appeal we could make on the show is the timeslip setting. Imagining a royal prince sitting in my room out of nowhere will definitely leave me dumbfounded. But my role is relatively easier than what Yuchun has to act out because he needs to express how a person would feel when he transcends time and space without knowing the reason. It is a fun process to convey how the characters inside the story would feel to the viewers.”

Lee Min-ho: “Working on the ‘Rooftop Prince’ was quite different from shooting ‘The Moon Embracing the Sun.’ Both dramas involve a historical acting but I really enjoyed shooting 'Rooftop' because of the comic outline. The events that the prince and the three courtiers go through are sometimes outrageous and absurd. It has been only a month since we began shooting and we try to avoid looking at the other person in the eyes because we break out laughing. I hope the camera didn’t catch that (laugh).”

Han Ji-min: “I was feeling a bit blue after crying a lot in the previous drama. But this one allowed me to be perky and act out an outgoing character. Rather than pulling out the inner feeling of my character, I think I can provide more fun to the audiences by playing my perky character in these comical situations."

Jung Suk-won: “I play the role of a warrior but unlike his stern face and fit body, he is a total fool when it comes to love. Actually, it is much like who I am. I don't have much experience in dating women because I used to play sports before becoming an actor. The character I play in the story also lacks experience in terms of love and he blushes in front of the woman he loves despite his manly looks. My girlfriend (songstress Baek Ji-young) is also expecting a lot from the series."

Park Yuchun: “This is a comedy drama but another thing to focus on is how the prince changes from a royal family member who shows serious and stern demeanors to a warm-hearted guy. As the show goes on from one episode to another, you will slowly find the prince realizing what is really important as well as the humane side of himself.

Lee Min-ho: “I was really worried from the beginning of our shoot. Park is such a big star in the country and abroad, and Jung looks so charismatic and I wondered how I’d get along with all the actors here. But they’re so funny to the point where I don’t even feel like they’re top celebrities. They all made me feel comfortable and I really enjoy being part of all this.”

Choi Woo-sik: “I also thought it was going to be awkward because I’m just a rookie and they’re all huge stars. But they treat me very well all the time and it’s fun.”