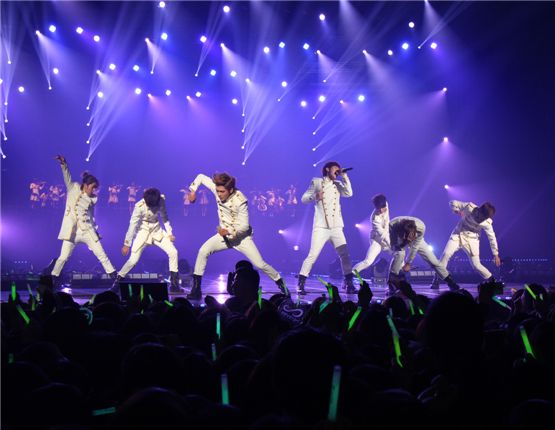 On Saturday, a number of international and local fans showed up for INFINITE's sold-out concert "SECOND INVASION" in Seoul which began with a powerful dance introduction and their songs "Come Back Again" and "Hysterie."

"It is a great honor to hold our first concert in Seoul and we want all of you to enjoy your time here," INFINITE's leader Sung-kyu said greeting the fans while the other members expressed their appreciation as well to those who were in attendance.

The boys took the stage for their songs "Tictoc" and "Wings" which they have not performed on any televised music programs and slowed things down with their ballads "Can U Smile" and "Fixed Star."

The group's individual performances then began, starting with L's solo of "When I'm Next to You..." while member Sung-jong played the piano and Sung-kyu gave rock-and-roll stage performance of "Because." The members then appeared on stage for their hit song "Before the Dawn (B.T.D)" and "Paradise" while members Dong-woo and Hoya gave a duo hip-hop performance of songs "You Look Happy" and "Crying."

The individual acts continued with Woo-hyun's ballad "Time" and members Sung-jong and Sung-yeol, who dressed up as a woman, came on stage for their rendition of Cube Entertainment's duo Trouble Maker's hit song "Trouble Maker."

The other members rejoined Sung-jong and Sung-yeol on stage for their song "Hidden Track" and performed the shuffle dance for dance tune "1/3."

They sang a medley of their songs "Real Story," "Cover Girl," "Lately" and "Nothing's Over" while Sung-kyu revealed that they will unveil a special present for their fans on Valentine's Day and Hoya announced that the group will soon make their comeback.

The boys then came on stage for their songs "She's Back," "Amazing" and "Be Mine" and gave their final remarks while members Dong-woo and Hoya shed tears and sang their last song "Entrust."

INFINITE finally reappeared on stage for their encore performances of "Julia" and "Voice of My Heart."

INFINITE will take their "SECOND INVASION" concert to Japan with shows at the Tokyo International Forum from February 25 to 26.