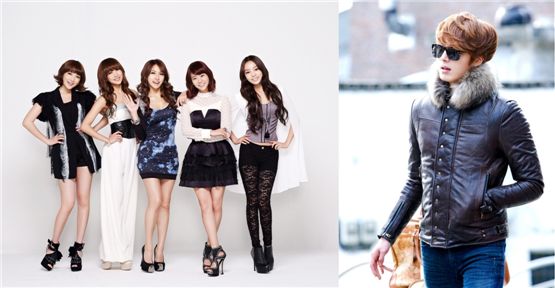 Korean female idols KARA, Rainbow and actor Jung Il-woo will be honored for their fashion sense and style at the 2012 Asia Model Festival Awards, according to their respective agencies.

On Wednesday, DSP Media announced through a press release that KARA will receive the Asia Model Star Award during the ceremony at the 7th annual Asia Model Festival Awards which will take place in Olympic Hall in Seoul tonight.

Meanwhile, fantagio stated that Jung will be presented with the special fashionista award for his style shown in TV series "49 Days" and "Cool Guys, Hot Ramen."

"I am extremely thrilled to be receiving an award for my fashion sense which I was able to show through my previous dramas," Jung was quoted as saying. The Asia Model Star Award, sponsored by the Ministry of Culture and Tourism, will be held under the theme of 'Asia is One' this year and feature various fashion shows, press conferences and other events.

It will showcase the best in fashion and models from 15 countries including Korea, China, Japan, Taiwan, Indonesia, Uzbekistan, Mongolia, Singapore, Malaysia, India, Thailand, the Philippines and Vietnam.