2011 10Awards│TV series and director of the year

It was not an abundant year. During the whole year, there were only a handful of dramas that left an impression and 10Asia's choices for drama, director, writer and actor of the year got focused on two projects or so. But despite this, we were happy, angry, cried and laughed because of the dramas that were shown at the times they were in 2011. That is why once again this year, we reveal the choices made by the writers of 10Asia who we can proudly say kept a close eye on the numerous dramas that went on air. This is not to deem one better than the other but to share the memories and emotions in each person's heart. 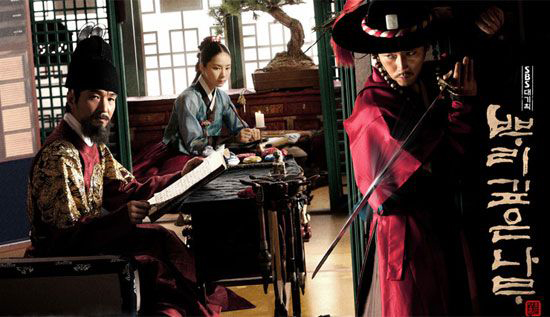 썝蹂몃낫湲 븘씠肄
Would it be exaggerated to say that, "There was not a competitor that even went close. 'Deep Rooted Tree' was in a league of its own" (Cho Ji-young)? But in the Korean broadcasting environment, where it is becoming increasingly impossible for a drama to be acknowledged for its intrinsic nature, it is close to a miracle to come across a project that contains the perfect balance of "a well-knitted script with a message calling attention to reality backed by multi-layered narratives such as mystery, politics, psychology; solid acting which can pull off characters with egos that are in conflict due to their multiple identities; and directing which exquisitely controls the amount of style found in fusion historical dramas versus traditional historical dramas" (Kim Sun-young). And the show having made "even this moment of writing this comment special since it is a reminder of the meaning to each letter we had taken for granted" (Lee Ji-hye) greatly expanded on the reach of TV dramas in the sense that it "beautifully solved the political conundrum of how to do politics that'll make the people the happiest and the drama-related conundrum of whether it is possible for 'culture' and an 'ideology,' not political action, power and love, to become the focus to a drama" (Kang Myeong-seok). That is why it will be worth looking forward to the attempts that will be made to surpass "Deep Rooted Tree" which will "serve as a magic square for many historical dramas" (Kang Myeong-seok).


Other Opinions MBC “The Greatest Love”
A drama which healed the hearts of 99 percent of Koreans who are ordinary citizens through a thorough examination, diagnosis and prescription on celebrities which account for one percent of the population. (Beck Una)
The latter half of the story was so incomplete that I felt bad to be following the drama nor did it excel in terms of its construction. But "The Greatest Love" contained a story which had to be told now. (Yoonina)
The reason that "The Greatest Love" is worthy of praise is not just because it appealed to a large audience but also because it contained a very healthy mindset. Goo Ae-jung who was poor but not shabby and loveable but not passive, was the most exceptional female character of the year and thanks to that, the drama saw a natural ending. (Yoon Hee-seong)

SBS "Sign"
The choice that Yoon Ji-hoon made in the last episode was a great one but unlikely to happen in reality. Yet "Sign" showed that fantasy that everybody had hoped for but was not shown through the Korean media, in the most convincing way possible. (Wee Geun-woo)
There were many newsworthy dramas but only "Sign" was good enough to actually replace the news. (Lee Ga-on)
It pointed its scalpel at many affected areas in Korea this year. A drama which looked not only at different cases and individuals as criminals but also digged into the social system which brings about such social evil. (Choi Ji-eun)

MBC "Royal Family"
A drama which started as a reportage on how conglomerates move and maintain their power, then developed into a mystery drama which pursued the sins and truths regarding a human being, and ultimately discussed on how a being with many sins can be redeemed, while not letting go of any one of these three elements. (Lee Seung-han) KBS "Romance Town"
There were maids. And there were the lives of women who worked hard at earning their own bread while cooking those of others. It is slightly disappointing that the show leapt impertinently into the air, while slightly staggering between being a black comedy and romantic comedy, yet did not see through its initiative to a satisfying extent. But I am thankful that the drama made an interesting story out of the reality that so many dramas cowardly avoided although incorporating all sorts of odd setups and incidents into their shows, and even used it as the drama's focus instead of background. (Kim Hee-ju)

썝蹂몃낫湲 븘씠肄
The analysis that, "It was a year where you could rarely notice how stubborn the director was regarding making the drama. This will only get worse and the drama industry won't get any easier for one to seek aesthetics," (Lee Ji-hye) is sad yet true. In that sense, it is interesting that director Jang Tae-yoo of "Deep Rooted Tree," the winner of the most competitive Wednesday and Thursday primetime lineup as well as the most successful drama of the year, and Kim Yong-soo of "White Christmas" which was set to be in 16 parts but barely got produced with eight episodes and scored a single digit rating after showing on Sunday nights, tied in terms of the pick for best director of the year. Jang Tae-yoo, who revealed his talent through "Deep Rooted Tree" as well as improving a level from SBS' "The Painter of the Wind," showed directing that "draws out an actor's best acting while balancing the level of the message the drama aims to deliver versus the extreme fun it wants to show" (Yoonina) through "techniques of a master who knows exactly which points of the story to emphasize or loosen up" (Cho Ji-young). And like the expression that "the most intense and dramatic moment in 'Deep Rooted Tree' was not when it showed action sequences with excessive slow motion to sometimes make them even unfashionable but when the various characters belched forth their political stances. The strong tension shown through the adequate use of close ups and montages, made one heed attention not just to Sejong's voice but to everyone's voice" (Wee Geun-woo), the director completed on his depiction of a world without the use of swords.

On the other hand, the support for director Kim Yong-soo who "went between the extremes of being remarkable to poor, just like 'White Christmas' which was of uneven quality" lies in his directing skills which "delivered the meaning and emotion of a project through the use of space" (Kang Myeong-seok). He wheedled writer Park Yeon-sun, who said she would not do a drama if it was going to be eight episodes, into producing the drama in the drama market of 2011 where capital stood above the director and writer, he "went ahead with the experiment of producing cold scenes with a script disobliging dramatized, a pedantic theme, and risky young actors," (Yoon Hee-seong) and the adventure of this "director who moved with curiosity instead of ambition in regards to depicting the world which was interesting and refreshing because it was new" (Kim Hee-ju) achieved enough in this world "where a challenge in itself is sometimes significant, even if the result doesn't point to success" (Yoon Hee-seong). Wanting to create a drama which "can be approached with a sense of identity" may be a dream that does not suit the trend of the times but such a will of a director produced the most distinct project of the year.

Kim Do-hoon - MBC "Royal Family"
What stood out was his courage to take on a sensitive topic that stabs at the heart of conglomerate families in Korea's broadcasting environment where a director is also producer, and his perseverance which pushed the show forward till the end. He maintained tension while not losing a sense of balance. (Beck Una)

Kim Byung-wook - MBC "High Kick 3"
Kim Byung-wook is the most problematical director in Korea right now. If it were not for him, who would talk of youths withering away in cell-like lodgings from being stuck between student loans and unemployment. (Lee Seung-han)

Koh Dong-sun - MBC "Flower, I Am"
"Flower, I Am" is a drama that embraced and cried with its viewers instead of being powerfully moving. Director Koh Dong-sun's ability to direct showed through his use of the camera as an eye which read the emotions or sincerity of the characters that were not expressed through their words. (Lee Ga-on)

Lee Jae-dong - MBC "Hate to Lose"
I liked its ability to withstand the temptation from becoming a trashy drama. (Jung Suk-hee)

Lee Seung-young - OCN "TEN"
The drama shows the evolution and current status of cable TV dramas by proving that it is better than public broadcasters in terms of genre dramas. It also contains experienced directing which goes beyond understanding investigative dramas and hints to introspection. (Kim Sun-young)

None
I think it's becoming increasingly difficult to point out a producer's style in dramas. Director Jang Tae-yoo of "Deep Rooted Tree" could be an example [of one who shows style] but his style does not show as well as it did in "The Painter of the Wind." (Jang Kyung-jin)