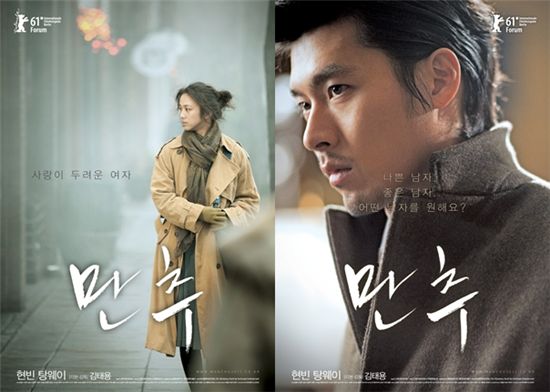 The Korean Association of Film Critics said on Friday that the pic helmed by director Kim Tae-yong will be handed the prize at an awards ceremony to be held tonight.

"Autumn," which opened in Korean theaters in February, is the remake of a 1966 film which tells of the coincidental meeting and love between a male gigolo named Hoon (Hyun Bin) and Anna (Tang Wei), who is in jail for murdering her abusive husband.

Its heroine Tang Wei will take the award for best actress and Yoo Jun-sang the mention for best actor for his role in Hong Sang-soo pic "The Day He Arrives."

"The Day He Arrives," also starring Song Sun-mi and Kim Sang-joong, tells the story of a young film professor that reunites with his mentor in a small village for a three-day stint. Yoon Sung-hyun of "Bleak Night," which has won a number of critical acclaims at film festivals overseas, will take the prize for best new director.

The pic tells of the story of three high school students Ki-tae (Lee), Dong-yoon (Seo Jun-young) and Hee-june (Park Jung-min) who fall out after a misunderstanding which leads to group assault and the death of one them.