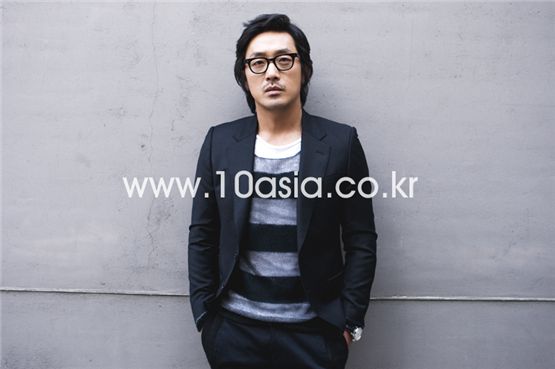 썝蹂몃낫湲 븘씠肄
Not once had his acting seemed awkward in his past projects yet the slightly relaxed tone and rhythm he spoke in for portraying lawyer Kang Sung-hee for his new movie "The Client" made the audience keep in time with his character more naturally than ever. "I thought of the overall flow of the movie rather than trying to show my character with depth in single scenes. What this audience would be like for the audience to get presented this case in the latter half of the pic. Whether the audience would be able to immerse themselves and follow the story if I was too serious and focused on myself. That's why I thought of being a guide who could make things easy to understand."

In "The Client," there was no coldness to him as there was when he was a murderer who with a smirk on his face, asked a female detective, "You're on your period, aren't you?" in "The Chaser" nor did he create the powerful moment he did when he filled up the screen with sympathy with his worn out and soft-hearted eyes in "The Yellow Sea." And this does not mean he had no presence in the movie. You come to realize that Kang Sung-hee's footsteps are the ones that ultimately serve as the big picture to the movie while chasing him for the legal battle surrounding Han Chul-min (Jang Hyuk) who has been charged with murdering his wife, showing that Ha is capable of a different kind of acting. He is also a man in his mid-thirties who can say that the time he can spend listening to music in the car, for two to three hours because there is traffic, is valuable. Ha recommended the songs which keep him at ease and enrich his life. <#10_LINE#>

썝蹂몃낫湲 븘씠肄
1. Stevie Wonder "Song Review"
Ha Jung-woo explained where each of the songs he recommended gets placed in his daily life and Stevie Wonder's "For Once In My Life" was for "before eating dinner." It is difficult to explain how outstanding "For Once In My Life" is since Stevie Wonder has produced a countless number of masterpieces. Yet, could it be because the lyrics to the song is autobiographical but Stevie Wonder smiles brightly when he sings starting with "For once in my life I have someone who needs me" in particular which can be confirmed through various versions of video clips of him singing the song. That is why the bouncy rhythm to "For Once In My Life," which is achieved when the singer is enjoying himself, beyond being a mere technique, stands out even more.

썝蹂몃낫湲 븘씠肄
2. Morten Harket "Wild Seed"
The second song that Ha recommended, for listening to "when you miss the person you love," was Morten Harket's "Can't Take My Eyes Off You." Harket, formerly a vocalist of Norwegian pop band A-Ha, sang the remake of Frankie Valli's song from 1967, which drew popularity after being used in movie "Conspiracy Theory." Muse and Japanese artist Izumi Sakai produced remakes as well but Harket's version has remained the most popular number. The highlight of the song, which throughout does well at revealing the narrator's emotions of having fallen deeply in love, is when he straightforwardly cries out, "I Love You Baby."

썝蹂몃낫湲 븘씠肄
4. George Michael "Ladies and Gentleman"
The fourth song Ha recommended was George Michael's "Freedom 90" which he said is for listening "before going to an important appointment." George Michael's husky voice slowly intensifies the atmosphere on the sound of the keyboard and guitar and hits a high note when he cries out "Freedom" along with the female vocalists with their rich sounds. Some have said the song is about freedom of creation due to the legal battle between George Michael and Sony Music after the song's release but it will probably more proper to see it as singing of more general ideas. The song is also famous for it's star-studded music video which was directed by David Fincher and starred the top models of the time including Naomi Campbell, Cindy Crawford and Linda Evangelista who lip-synced to the song.

썝蹂몃낫湲 븘씠肄
5. Steve Aoki "I'm In The House" (EP)
Ha said Steve Aoki's "I'm in the House" is for listening to "when you're excited but want to become even more excited." It is the tune that is most representative of DJ Steve Aoki who is also movie star Devon Aoki's brother. A featuring by Zuper Blahq combined with Steven Aoki's deejaying creates an exciting beat which could turn even the space that you're in into a club if you listened to it with earphones in your ear. Because it is by a DJ, one can hear various versions of "I'm in The House" in the EP but the original version does best at bringing at the electronica vibe.