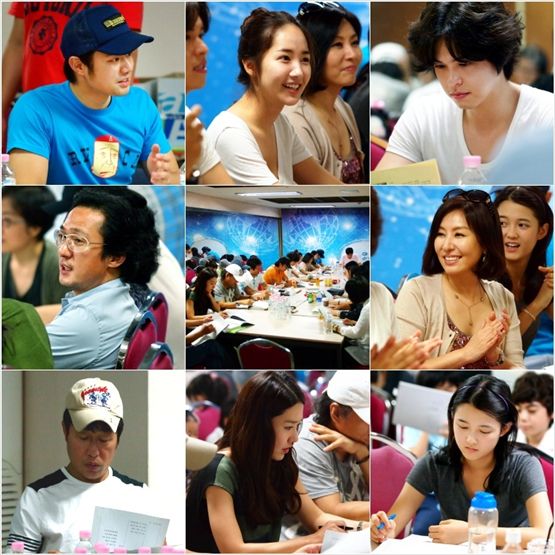 Photographs of a script reading session for upcoming KBS TV series "Glory Jane" have been revealed.

A press release by the show's promoter 3HW on Wednesday revealed photos of the main cast Park Min-young, Chun Jung-myung and Lee Jang-woo taking part in the session held at KBS' studio on September 10. Other members of the cast such as Choi Myoung-gil, Son Chang-min and Park Sung-woong attended the reading as well.

"We feel that the actors are getting in touch with their characters and it seems as though the teamwork amongst the cast is coming together too," a producer of the show was quoted as saying.

"Glory Jane" will tell the story of Kim Young-gwang (Chun) who suffers from a baseball related injury who meets a nurse aide named Jane (Park). The show, set to premiere on October 12, after current series "The Princess' Man" ends its run, is a collaboration between producer Lee Jung-sup and scenarist Kang Eun-kyung of the hit baking drama "Bread, Love and Dreams" (KBS, 2010).