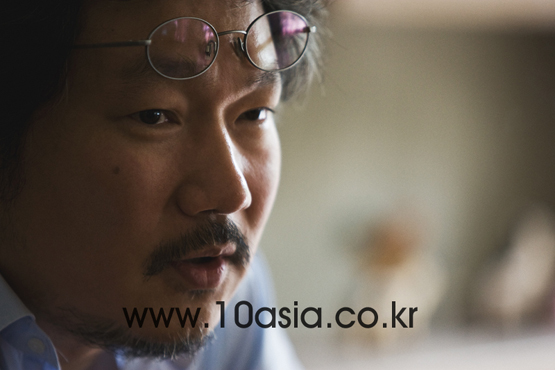 * This article contains spoilers to movie "The Day He Arrives." The lights in director Hong Sang-soo's study never go out. After releasing "Hahaha" and "Oki's Movie" in early summer and fall, respectively, of last year, he is back with his 12th report "The Day He Arrives" set for a release on September 8, which is still interesting, again detailed and a particularly beautiful record of a winter.

<#10LOGO#> You had originally planned to shoot a movie in Buan after "Oki's Movie" right?
Hong Sang-soo: Yes, I had. But I couldn't think of anything although it was time to. So my producer got a residence hotel in Insadong for me for about two days to organize my thoughts. And I was smoking on the verandah there when I saw Bukchon and thought, ah, how about I shoot something there? But instead of going with my previous method of seeking out the moments that are repetitive while the story moves forward, I wondered what it would be like to go with an idea that repeats itself in its entirety. I started with the thought that a man would go to the same place three times and then we'd see what happens. <#10LOGO#> Was there a particular memory or impression you'd had of Bukchon?
Hong: No. I rather told myself that I shouldn't have any organized thoughts or images about that place. Because if I did, I would drive the movie in that direction. It was just a 'Let's try going there. And let's see what relationships come about of the broken fragments that pass through me.'


<#10LOGO#> Actress Kim Bo-kyung plays both the ex-lover Kyungjin and bar owner Yejeon. Why was it that you decided to go with two characters who look alike yet be very different in attitude?
Hong: It wasn't intentional. It just turned out that way while shooting the movie in order. After deciding to do the movie with Kim Bo-kyung, I remembered that Seongjun (Yu Jun-sang) would go to his ex-girlfriend's house when he gets drunk, so after we shot that scene, I decided that he would meet a new woman in Bukchon. And after that, Kyungjin would appear only in text messages. Up till "Hahaha," I at least had a rough idea of how the story to a movie would develop but starting with "Oki's Movie," I didn't think of even about that. Even with "The Day He Arrives," I roughly decided on the cast and locations, and came up with the scenes only after starting to shoot the movie. Having the female characters be similar came from such a process as well. It may be standard to do foreshadowing and setting up points of connection for scenes that'll appear in the movie at a later point but I really went with my instincts for this movie, with nothing set in advance. It's sort of hard to explain in words but my senses would open in every direction possible in the mornings. There wasn't even a rough central idea I was going with.

Scenes from "The Day He Arrives" [JEONWONSA]

<#10LOGO#> Why do you throw yourself into such experiments when the method you use could be very dangerous?
Hong: I'm inducing myself to do different things. From my debut to third movie, I wrote out everything down to the script. Then "Turning Gate" was the first movie I shot with just a treatment. But after filming "Hahaha," I told people that I want to stop going with the method of thinking everyday over a treatment. I had the strong desire to use a different method. So I gradually cut down on the treatments as well until I just stopped thinking about a movie's development starting with "Oki's Movie." Let's make myself move within a different mold and see what comes out of it. That's what I became curious of. <#10LOGO#> In "The Day He Arrives," it was interesting that you pointed out that most people agree to statements that link extreme remarks such as "You look strong on the outside but are actually very weak." And it was fun to see that women confessed they are like that as well even after hearing that it's a universal trick.
Hong: It's what actor Kim Eui-sung told me while we were having a beer after the first filming session for the movie. In a way, everybody thinks they are complex beings. Yet they are seen in excessively simplified ways by people which they feel is unfair so if you tell them these sort of things, they mistaken you for understanding you well.

<#10LOGO#> Do you think of yourself as a complex person?
Hong: All human beings, including me, are complex. But we're always forced to speak of ourselves in simplified ways. And yet there is a limit to expressing what someone is like through language. So that's why people listen to music and look at paintings. They want to break away from that excessive simplification brought upon them through language and experience themselves in their original state or at least somewhere close to it.

<#10LOGO#> What sort of stimulation or energy does actor Yu Jun-sang give you whom you've worked with for "Like You Know It All," "Hahaha" and "The Day He Arrives"?
Hong: I just... like him. I like him a lot. He is someone with a drive that doesn't irritate me. His honesty doesn't irritate me either and I like his energy. His energy has a clean color. And I think he's a lot of help when we work together. He doesn't irritate me even when he's talking a lot. It's cute. (smile)

<#10LOGO#> I still have a lingering image of how Seongjun (Yu Jun-sang) looks terrified out of his wits.
Hong: I usually don't say these kind of things but I think that closeup was saying something important in its own. I actually had thought of a different scene for the ending but I decided that I'd like that instead. I liked the eyes as well.