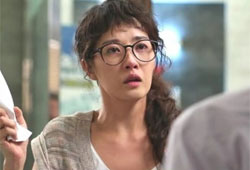 Scene from "Scent of a Woman" [SBS]

She had lived an insane life. For all 34 years of her life, Yeon-jae (Kim Suna) had "sacrificed everything" to her superior because she had gone from being a contract worker to a regular employee and she lived her life "not spending, not eating, not buying" to try to stabilize her uncertain future but all she was left with was a diagnosis for gallbladder carcinoma and six months to live. And the first episode of "Scent of a Woman" depicted on her insane and miserable life at work to the extent that it was slightly uncomfortable. The scenes in which she fell into 100 portions of bibimbap while bringing the red pepper paste for it and got falsely accused of being a thief when the ring of the VIP guest she attended to disappeared, were shockingly lackadaisical but her superior's spiteful remark of saying, "It's because of you that 25 year olds who are still wet behind the ears and have great educational background are jobless!" was a direct portrayal of the rudeness committed within organizations. And just when the situation become too much for even the viewers to handle, Yeon-jae throws her letter of resignation at her superior's face and shouts, "You bastard!" In other words, the show's first episode in which Yeon-jae was driven to a corner through the excessive use of coincidences, served itself to the catharsis that follows after. The process in which she turns in her resignation, slaps the face of Se-kyung (Seo Hyo-rim) who insulted her, and leaves for a vacation by using the money she had been saving, moves forward swiftly but nothing seemed out of place. In just two episodes, Yeon-jae became the spokesperson and hero of all the women who put up with their lives like she does. But this does not mean the irrationalities that tormented Yeon-jae have been solved. All she has done is left that place. Screenwriter Noh Ji-seul may have differentiated "Scent of a Woman" from her previous work "Doctor Champ" by forcing Yeon-woo (Kim So-yeon) to leave while Yeon-jae chooses to leave but both provide their main characters with new lives by separating the innocent individuals from their festered organizations. However, the fact that "Scene of a Woman" tries to tell its story on the premise that there is a world, beyond the murky relationships involving class, prejudice and rank, where a pure form of communication occurs between human versus human, makes the drama fantasy in genre. Yet it is only by fighting up against that murky world that you live a humane life -- you are not guaranteed it by living in a sterile world. "Doctor Champ" was able to go beyond being a fantasy by allowing its story to be set at the tough Taereung National Village. How will Yeon-jae, who is in Okinawa after giving up on all human relationships, be able to tell a story which other numerous women like her in the world will be able to empathize with?