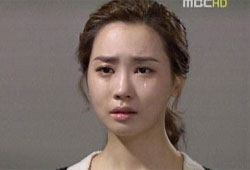 A scene from "Miss Ripley" [MBC]

The entire finale episode of "Miss Ripley" was an epilogue. And it was easy to predict what was going to happen given that the 15th episode had ended with Miri (Lee Da-hae) falling into the water after the conflicts, including Miri's acts of fraud and the secret to her birth, got exposed. While Miri was unconscious, the characters surrounding her were given the chance to try to mend the incidents that had occurred within the drama. The moment the whistle was blown, the obsessive Hirayama (Kim Jung-tae) became as gentle as a lamb and let Miri go, Lee Hwa (Choi Myung-gil) who woke up at a good timing at the hospital, was given the chance to nurse her daughter and ask for her forgiveness, while Yu-hyun (Park Yuchun) said he must help Miri recover the life she lost. And when Miri finally woke up, the drama spent most of its time allowing Miri to justify her actions. By using the 15th episode as a time for the surrounding characters to defend themselves and packing the finale episode of the drama with self-justification, the drama itself proved that the main character was difficult to empathize with. That was the very problem to "Miss Ripley." Jang Miri was someone that people could empathize with over the simple fact that she is an orphan and poor woman who gets abused but there was nothing about her on the inside that viewers could see about her from a social perspective. It even failed to make use of the chance to become a masterpiece, something that could have been done by staying faithful at depicting on a woman who gets torn between social barriers, greed and self-deception by bringing forth the Shin Jung-ah scandal and 'Ripley syndrome.' And although she had a self-deprecating view on herself as being "a girl with nothing," it was her physical beauty and the support she got from people around her, rather than her covering up her eduction, which played a big part to her being victorious. That is why the ending of how she lives a new life of forgiveness and repentance after being saved from the water, almost as if she got baptized although she hadn't identified what her own problems are, was in vain. "Miss Ripley" could have at least left a lingering that matches up to its byname had it rather decided to end with the virtual reality of an unconscious Miri like the ending to MBC's "Cinderella" which the show so often got compared to.