On the set of tvN series "In Need of Romance" 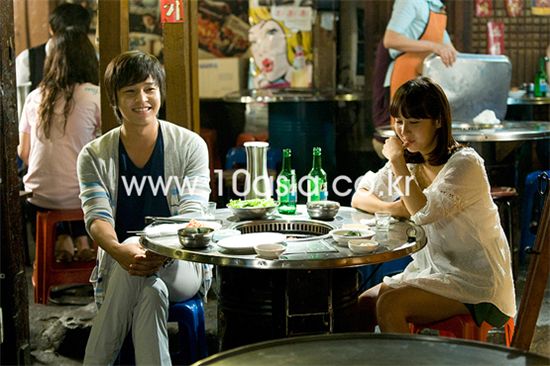 From left, actor Kim Jeong-hoon and actress Cho Yeo-jung on the set of tvN TV series "In Need of Romance" in Seoul, South Korea on July 11, 2011. [Lee Jin-hyuk/10Asia]

썝蹂몃낫湲 븘씠肄
"Do you still have feelings for me? Are you regretting you lost me after it's happened? Why are you badmouthing Bae Sung-hyun?" "It's only because I'm worried! You had a hard enough of a time by dating someone like me so I don't want to see you crying again!" The girl's heart aches over her new boyfriend and the ex-boyfriend takes the girl's side while taking shots of soju. This may seem incomprehensible, given that the two broke up after ten years of dating but in a weird way, it also almost seems understandable.

The filming for cable channel tvN's "In Need of Romance" took place at a pork rinds restaurant in Seoul on a pouring morning on July 11. The show, which goes better with a bitter shot of soju than sweet cake, showed well on this set as well. While a member of the crew worked hard at grilling meat in one corner of the restaurant, the drama's two main characters Cho Yeo-jung (Sunwoo In-young) and Kim Jeong-hoon (Kim Sung-soo) practiced their scene of bickering while slurring their speech with no focus in their eyes. And the emotions Sung-soo feels towards In-young who is in misery over Sung-hyun (Choi Jin-hyuk) was important in this scene so director Lee Chang-han gave detailed directions on this to Kim Jeong-hoon who did not let go of his script up till the very moment he goes into shoot. "Sung-soo, even the briefest single expression that you show will decide whether you'll be forgivable or not. You won't be forgiven easily nor immediately but I think it'll happen if you keep building on those emotions. The only way you can live is to bring out the details." And unlike Kim Jeong-hoon who was serious about his shoot throughout, Cho Yeo-jung's tiny face would light up with a cheerful smile as soon as she got the cut sign. She would then ask, in a high-pitched voice, if her stylist wants a drink when she came over to her to fix her make-up and to Kim Jeong-hoon, jokingly criticize him for nicknaming her after the sound she makes when one passes gas, which her character often does on the show. Then when the cameras start rolling again, including the DSLR camera which produces video in beautiful color, and then zooms into Cho's face, she says, "I'm miss so much..." with eyes brimming with tears. So who is it that In-young misses? Sung-soo who is belatedly begging for her love or Sung-hyun who is making In-young's and female viewers' hearts flutter. If you are curious of what is going on regarding this complex love triangle, do not miss the 14th episode of "In Need of Romance" on July 26. 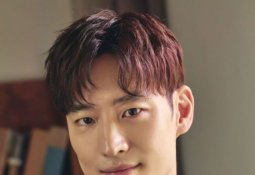