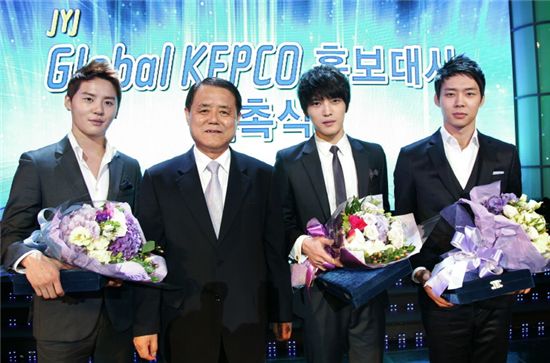 Korean trio JYJ have been appointed honorary ambassadors for the Korea Electric Power Corporation (KEPCO), according to the group's promoter Prain Inc. on Wednesday.

As PR ambassadors, JYJ took to the stage to perform their songs "In Heaven" and "Empty" during the 50th anniversary celebration of KEPCO which was held at their head office in Seoul on July 5.

"JYJ's youthful, dynamic and global image matches the direction our company is headed for and for the celebration of the 50th anniversary of KEPCO," a PR official from KEPCO was quoted as saying. "We hope to fulfill various projects worldwide with the group."

"I have always heard positive things about KEPCO and of the many social contributions that they made to the less fortunate," member Jaejoong was quoted as saying, while Yuchun and Junsu said they will work hard on their activities overseas like KEPCO.

JYJ, formerly of quintet TVXQ, made their comeback to the local music scene in October of last year with their album "The Beginning" and have promoted themselves in Korea and overseas with their worldwide tour. Outside of their group activities, Jaejoong is currently working on SBS' upcoming drama tentatively titled "Protect the Boss," Yuchun is starring in MBC's TV series "Miss Ripley" while Junsu finished the encore performance of the musical "Mozart!"