On the set of SBS TV series "The Warrior, Baek Dong-soo" 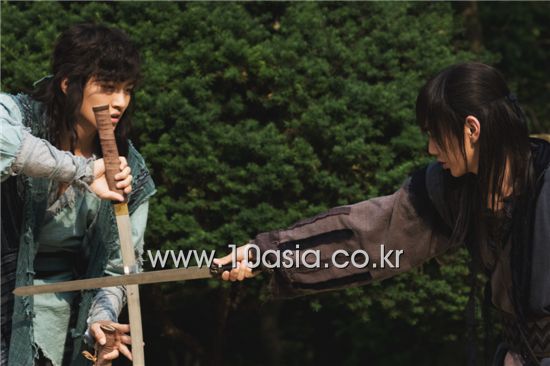 At 4 p.m., a time when the summer heat has let up, a handsome young boy with long black hair and a bow in his hand stands on one side of the Korean Folk Village, completely absorbed in practicing his action moves. He who has the physique of someone who is better suited for sword dancing yet has a gaze which is sincere enough to penetrate a boulder, is none other than actor Yoo Seung-ho. Then another good-looking boy, this time with long wavy hair, runs over as well and pleads a member of the martial arts team to teach him some moves. It is Ji Chang-wook, catching the eyes of onlookers with his well-defined smile and mischievous expressions. And this is the set of SBS TV series "The Warrior, Baek Dong-soo" which ahead of its premiere on July 4, went into shoot today starting at 5:30 a.m. They had good reason to become tired of practicing the action moves -- the weather was so hot that one would sweat even from standing still in it yet they also had to wear several layers of clothes and carry heavy swords and bows. However, as if unsatisfied with the chemistry of their moves, the two actors continued to make even the slightest adjustments to the angle of their arms and knees after asking for extra time, probably more so from the pressure of the show's set being open to the press. This is why the acting these two young actors will show to viewers in "The Warrior, Baek Dong-soo" which strives to show "an action drama that draws on characters' emotions by telling a martial arts story with genuine meaning instead of warriors walking on water and flying in mid-air," seems worth anticipating.

"The Warrior, Baek Dong-soo" is a 'humanistic action historical drama' based on a comic and Baek Dong-soo was a martial arts expert who mastered the martial arts of Korea, China and Japan during the Joseon Dynasty to the extent that a book was written based on his martial arts. The show will incorporate a couple elements from the original comic including some of the setups and characters but most of the plot is said to have been newly created Hence it will also be worth looking forward to seeing how real-life martial arts is shown on the small screen.