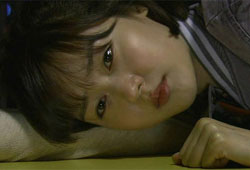 "Romance Town" started with a scene showing a young Noh Soon-keum (Sung Yu-ri) watching the 1988 Seoul Olympics with her grandmother (Kim Ji-young) and mother (Lim Ye-jin). The drama took off from the times when just like the grandmother asked, "So will our country become rich now?", the entire nation believed everyone's livelihoods would improve and mothers, like those of Soon-keum's, swore they would not let their children suffer the hardships that they did. But 20 years later, the same money continues to run in their bloods. Soon-keum, whose grandmother and mother were both housekeepers, becomes a housekeeper herself and Kang Kun-woo (Jung Gyu-woon), who has a rich dad, is still rich. While most romantic comedies are absorbed in linking the main male and female characters together, "Romance Town" drew a strict line between the two's social status and focused on the reason it must depict on the rich and their housekeepers that live on the first street of the posh district of Gangnam in Seoul.

For this, the drama made sure in showing the difference between the women in the two classes. While crying, Soon-keum's mother says, "Your father said I smell of a refrigerator, of rotten food in the refrigerator, so that I'm not even a woman." But Kun-woo's stepmother Suh Yoon-joo (Yang Jung-ah) can adorn herself as much as she want, to the extent that she'll wear a diamond ring on her toe, and she is loved as a woman as well by her husband Kang Tae-won (Lee Jae-yong). But the interesting thing is that Jung Da-kyeom (Min Hyo-rin) and Oh Hyun-joo (Park Ji-young), other housekeepers on this street, do not let go of their desires and femininity. Da-kyeom tries to look like a woman to Kim Young-hee (Kim Min-joon) who is the owner of one of the houses and Hyun-joo always works looking her best. Through this, the drama hints to housekeepers' desire to rise in social status. Basically, it has finished laying the foundation to drawing forth chemistry between the rich and their housekeepers. There was no romance to the first episode of this romantic comedy but "Romance Town" has left one of the strongest impressions the recent flood of romantic comedies have.