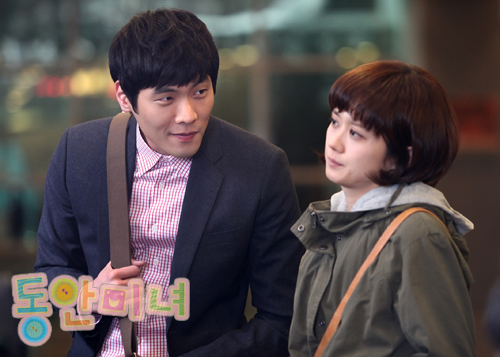 A scene from "Youthful Beauty" [KBS]

Just like its title which we are somewhat unfamiliar with, yet is quick to capture the trend of society encouraging one to look young, "Babyfaced Beauty" is about the success story of 34-year-old Lee So-yeon (Jang Nara) who is a super young-looking single woman. But the story in itself is not particularly refreshing except for the fact that Lee's looks, making her seem ten years younger than her age, plays an important role in each incident, proving the strong presence of her youthful face. So-young is sweet, energetic yet slow-witted -- the typically 'hard-working nothing-can-bring-me-down' female character that has been played by numerous actresses in the past including Jang Nara. And then there is always the 'annoying nuisance' around the cliche main character -- in this show her younger sister So-jin (Oh Yeon-seo) who has made So-young into a credit delinquent because of her spending habits and steals expensive jackets from the clothing repair shop that So-young works at.

This is when it becomes obvious what will happen after So-jin briefly leaves her jacket with Jin-wook (Choi Daniel) at a club and So-young tries to take it from him without an explanation. The jacket gets ruined and So-young and Jin-wook need to pay 20 million won to compensate for it. Of course, they are forced into this dog and cat relationship because it is intended at placing the two at the point where all romantic comedies start. But the problem is that even this evident development in the story could not make head or tail amidst the awkwardness of its supporting characters and odd and choppy editing.

Of course, there are moments that need to be overlooked for the sake of the story, such as how So-young runs into Jin-wook again and meets with Seung-il (Ryu Jin) after taking up the position for a fitting model which So-jin, who is 10 centimeters taller than her, used to have. But whether it be through the lines, characters, or story, if the holes in the story's frames cannot be filled in, it will also be that drama's fate to sink.